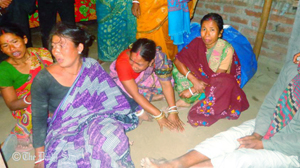 Relatives mourn on the death of the priest and a devotee who came under the attack by miscreants at a Hindu temple in Debiganj upazila of Panchagarh in the morning on Sunday. -STAR

A Hindu temple priest was hacked to death and a devotee shot in an attack by some miscreants in Deviganj upazila on Sunday morning. Police and witnesses said some miscreants who came in a motorbike set off several crude bombs at Sonto Gourir Moth on the western side of the Karatoa River in the upazila headquarters around 7 am. As priest Jogeshwar Roy, 50, came out of the temple, the miscreants swooped on him and hacked him to death with a sharp weapon. They also fired gunshots on Gopal Chnadra Roy,35, a devotee, when he tried to flee, leaving him injured. Another devotee, Netai Pod Das,40, suffered injuries as the assailants hurled crude bombs at him when he came forward in aid of the priest.
Gopal’s mother Chirta Rani,60, fell sick following the attack. Gopal was whisked off to Rangpur Medical College Hospital while Netai and Chirta Rani were admitted to the Upazila Health Complex.