Heartless attitude or Brand of Justice? 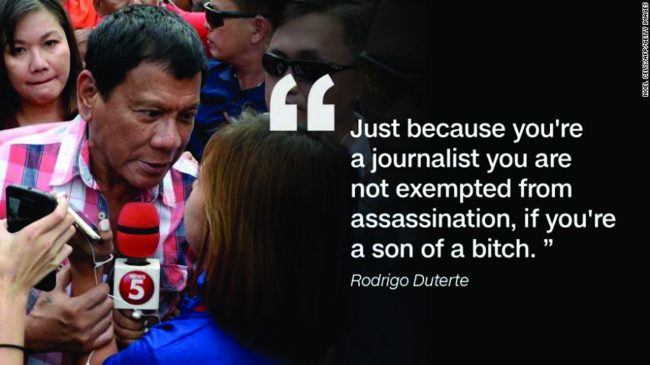 “Peace and order is the foundation through which progress can be made, I will make this place peaceful for you.” Pledging to end corruption by running a government that was “clean as in clean, down to villages”, Duterte said that if criminals put up any resistance, “I will simply say, ’kill all of them’.”!
President Rodrigo Duterte of the Philippines has been under general skepticism regarding his value of human rights as he has clearly been seen embracing violence as part of a push against both drug dealers and addicts.
“I will simply say, ‘kill all of them’.”- has been a dialogue bringing both positive and negative standpoints ever since. I personally heard some people say that this “suggestion” is a bold and wise one considering the number of criminal activities in Philippines but can this statement be justified with perseverance?
During his campaign, Rodrigo Duterte promised, in so many words, that he would launch a killing spree aimed at ridding the Philippines of drug-related crime as soon as he became president. He offered bounties to the police, the military, indeed anyone who wanted to help him with the job of assassinating 100,000 criminals during his first six months in office. He bragged there would be so many bodies in Manila Bay that “the fish will grow fat.”!
Shocking yet expected Mr. Duterte appears to be a man of his word: right after the month of his joining, more than 420 people have been killed, 154 by vigilantes, the rest by the military and the police. Most appear to be low-level dealers, casual users or petty thieves whose greatest crime is poverty. All were murdered in cold blood.
Well, seemingly his reaction towards “the fishes” of manila bay and feeding them is much humane than it should have been towards his country’s citizens!
Taking some lessons from the past, some people strongly believe that Mr. Duterte’s solution to the crime and drug problems — extrajudicial assassinations — will not only add to the misery of the poor, it will do grievous harm to the country’s democracy.
Duterte was earlier accused of running vigilante death squads during his more than two decades as mayor of Davao, a city of about two million people that he said he has turned into one of the “nation’s safest”. Rights groups say the squads – made up of police, hired assassins and ex-communist rebels – have killed more than 1,000 people. Though he boasted on one occasion during the campaign of being behind the squads, saying they killed 1,700 people. But other times he denied any involvement.

Okay, you killed drug dealers and vigilantes to make the nation safe but the outcome was certainly not that satisfactory! Apparently the crime rates are high and the city is still the country’s murder capital, so how does the killing spree help in all of this?
It might seem like questioning duterte’s actions is more like siding with the criminals but if only his actions were limited to targeting criminals….. In June, he seemed to suggest that journalists who had been killed in the Philippines — one of the most dangerous countries in the world for the media — had it coming. Reporting critical of the authorities, he said, “Can’t be just freedom of speech. The Constitution can no longer help you if you disrespect a person”. He has occasionally pardoned killer cops, slammed catholic pope, attacked the UN and urged military snipers as well as the public of the nation to join his killing spree.
We know that to start of an argument you need to bring both sides on the plate. Two sides of a situation brings more sagacity to the matter but to be honest, words and history would fail to bring the positive side of the story upfront.
Considering the recent situation, Mr. Duterte seems beyond restraint. His provocative words, reckless behavior and incessant assassination cannot be the solution to the issues Philippines is facing.
In order to strengthen the country’s institutions, Filipinos need to respect the rule of law. Follow due process – a system that guarantees that the state respect all legal rights of the accused including the right to a presumption of innocence.
Unfortunately, this concept is too hard for most Filipinos to understand. While some may be ignorant of the idea behind due process, there are people who are aware of it but have become frustrated with the slow pace or lack of justice in the Philippines. Which is why it has become difficult for the average Filipino to believe in the Philippine justice system.
Yes, drug users need help. Eliminating poverty in the Philippines by addressing inequality, improving education and creating jobs would do far more to stem drug use and petty crime than assassinating supposed violators. Drug users need affordable rehabilitation not the threat of being hanged or beheaded.
We cannot deny that Mr. Duterte needs to focus on crime, of course criminals deserve punishment. But they also deserve due process. If this killing spree keeps going on, innocent people will be killed; and denunciations will also be used to settle scores and exploited by gangs to wipe out rivals. Filipinos’ desire for instant retribution will, surely, turn to horror, hatred and revenge. The rule of law will erode.
Bataan Bishop Ruperto Santos of Catholic Bishops’ Conference of the Philippines stressed the sacredness of life and urged the people to promote respect and protect life saying- “Only God has the power over life.