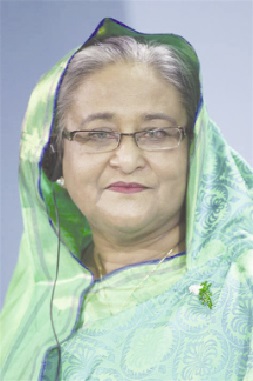 BDnews24
The prime minister and the rest of the delegation returned from the 10-day trip aboard a special Biman Bangladesh flight from London at 9:10am on Monday. She had departed New York aboard a British Airways flight for London on Saturday afternoon. She boarded the special flight there after a two-hour layover.
The prime minister spent six busy days in New York. In addition to her address to the 73rd UN General Assembly she also participated in high-level talks.
She attended bilateral talks with UN Secretary General Antonio Guterres and US Secretary of State Mike Pompeo.
During the visit she also received two awards. The Inter Press Service News Agency presented her with the ‘International Achievement Award’ for her exemplary humanitarian response by giving shelter to over a million Rohingyas. The non-profit Global Hope Coalition’s Board of Directors presented her with the ‘2018 Special Recognition for Outstanding Leadership award’ for her ‘farsighted leadership’ during the Rohingya crisis.
Sheikh Hasina attended several high-level meetings during which she urged the international community to come forward and help resolve the Rohingya crisis and presented several proposals.
On Set 27 she addressed the UN General Assembly, stating:
“We are disappointed that despite our earnest efforts, we have not been able to begin the repatriation of Myanmar’s Rohingyas in a permanent and sustainable manner.”
“We wish to see the immediate implementation of Myanmar’s agreement with the US. We want a speedy and peaceful solution to the Rohingya crisis.”
Hasina met UN Secretary General Guterres prior to her address. Guterres assured her of the UN’s ‘full support and cooperation’ on the Rohingya issue.
She met with US Secretary of State Pompeo the following day at the Grand Hyatt hotel in New York.
“The meeting was crucial,” Hasina said at the Bangladesh Permanent Mission to the UN afterwards. “We had an extremely fruitful discussion with the American secretary of state on the Rohingyas and the upcoming election.”
The prime minister met with the several leaders of UN agencies on Sept 26.
Sheikh Hasina, accompanied by a 50-member official delegation, left Dhaka on Sept 21 and spent two days in London before arriving in New York. She attended a reception organised by the US branch of the Awami League that evening.
On Sept 24 she attended a high-level discussion on the refugee crisis at the UN headquarters in New York.
She also participated in a discussion on the issue of international drug trafficking at the invitation of US President Donald Trump.
She took part in a luncheon meeting and roundtable discussion with the US Chamber of Commerce, where she received assurances of full support for investment in Bangladesh.
She also attended the Nelson Mandela Peace Summit, where she called for world leaders to resolve international issues through peaceful means.
She also attended a discussion on the ‘Investment for Education of Women and Girls’ organised by Canadian Prime Minister Justin Trudeau, where she stressed the importance of providing education to Rohingya children after their return to Myanmar.
On Sept 25 she spoke at an event on cyber security and international support at the Bangladesh Permanent Mission at the UN.
At the event Sajeeb Wazed, the ICT advisor to the prime minister, urged the UN to come forward to help smaller countries to handle cybercrimes.
The prime minister also attended a discussion organised by the World Economic Forum.
The following day she participated in high-level talks on the implementation of the Paris Agreement on climate change. There she urged the improvement of disaster management capabilities, and called for aid and technological support for disasters.