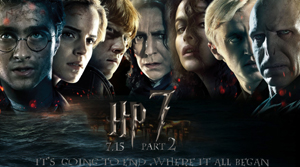 Harry Potter, a groundbreaking franchise which brought magic into the hearts of many both children and adults alike. With its seven well written novels to the eight mega movie blockbusters, it had enchanted so many. As the last movie, ‘Deathly Hallows Part II’ came out it marked an end of The Harry Potter Era. All that fans could do was just to reread the same books again and again and have marathons of the same movies over and over again as well. But recently Harry Potter fanatics rejoice after the announcement of two new installments into the much loved series.
As Harry Potter fans might already know that renowned author,J.K. Rowling had released many spinoff books, one being, Mythical Beasts and Where to find them; a gag book officially published by Bloomsbury, the same publishers as the main titles, this book being a book about the mythical beasts of the Harry Potter Universe and the locations to where we may find them. And now this much loved spinoff will be coming to theatres later in 2016, though it’ll beone Harry Potter film without any of the original characters from the beloved books it will sure have the same sense of magic and will surely without a doubt bring us under its spell just as the other movies have done. Though the actual Harry Potter characters shall not be in this film we shall still get a movie meant to be in the same universe. Then again we can’t really confirm any of this as our only source of info is just a mere teaser trailer. The first official teaser trailer of this movie has been out on YouTube for quite a while. It is suggested that you to watch it if you haven’t already. The plot being the tale of Newt Scamander (played by Eddie Redmayne) and how he caught the escaped beasts, a story seventy years before the legendary Harry Potter adventures took play. A Harry Potter spinoff movie set to be in theatre by the end of 2016. This film is highly suggested for all who have enjoyed the Harry Potter series or someone who wants a little bit more magic in their lives
The more recent announcement for the future of Harry Potter has been the new play set to be performed in London’s Palace Theatre in the West End. This new play titled ‘Harry Potter and the Cursed Child’ shall start its theatre run by this summer and shall continue till 2017 or maybe even further. Exciting news as along with this play also will be the initial release of its script as a form of another official Harry Potter book on a more specific date, July 31st, Mark your calendars. J.K. Rowling, the clever author planned to release this rehearsal script on the same day meant to be Harry’s birthday in the series. This book being a script of the stage play, not exactly a novel but the script of the play. Fans are excited as anything as now they aren’t just getting a new spinoff Harry Potter movie but as well as another one of Harry and his friends’ magical adventures, set to be in the forms of a play along with another book supposed to be its script. If you enjoyed Harry Potter or are a fan of fantasy literature this play/book is recommended for you.
Once Harry Potter had come to an end it left a large gaping hole in many obsessive fans’ lives. Harry Potter meant all in the world to them and no wonder as how much joy it brought to this world. Harry Potter fans rejoice, now as the continuation of the well-loved series has been officially announced. We shall have the two of these new additions to the series by the end of this year and people can finally sleep knowing their favorite wizard and friends aren’t over with all their magic.