‘Halloween Ends’ movie review: A bleak, engrossing conclusion that will make you squirm with discomfort 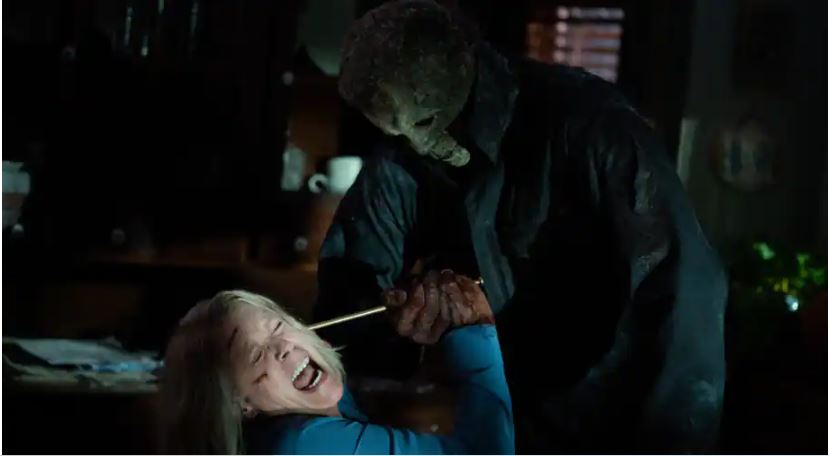 Wion: The venerable horror slasher ‘Halloween’ franchise comes to an end with ‘Halloween Ends’. Those in charge might still find ways to resurrect the masked killer, I have no doubt — orporations will never let a cash cow die — but this is certainly one end. It also wraps up David Gordon Green’s sequel trilogy that began with 2018’s ‘Halloween’, which ignored the intervening nine films. Kicked off by John Carpenter in 1978, the franchise has seen ups and downs, and most of the sequels before the 2018 film have been of indifferent quality that capitalise on the name of the property. David Gordon Green’s films, though, have tried to reinvent the franchise, to moderate success.
‘Halloween Kills’, the last installment, was a divisive film, but this scribe deemed it one of the best the entire franchise had to offer. It did not always stick the mark, but it painted a bleakly compelling picture of modern society and the nature of evil, whether Michael Myers’ or not. “Bleak” and “compelling” are two adjectives that will also go well with ‘Halloween Ends’, an outrageously audacious and bold conclusion that, for my money, will again prove divisive but I loved every bit of it.
For those unfamiliar with the franchise (how dare you), it, mostly, centres around Michael Myers, a dead-eyed, psychopathic, and seemingly unstoppable kiler and the woman Laurie Strode (Jamie Lee Curtis) who escaped him, the only survivor of the serial killer who visits the town of Haddonfield every Halloween to wreak mayhem and indiscriminately kill anyone he encounters.
‘Halloween Kills’ confirmed what fans of the franchise have suspected for decades: that he is more than a man. He was shot many times and fell, ostensibly dying. But then he stood back up and avenged his “death” on the residents of the town surrounding him. He is evil personified, “pure evil” as Carpenter called him, a literal boogeyman emerging from our nightmares into the real world. One victim of his rampage was Laurie’s daughter Karen Nelson (Judy Greer). The film was a commentary on the mob mentality, the incredible susceptibility to fear-mongering, and seeing every outside as the devil incarnate, which all come naturally to the human race.
‘Halloween Ends’ begins on October 31, 2019. A young man Corey Cunningham (Rohan Campbell) is looking for cash and is babysitting a kid called Jeremy. The kid is something of a prankster. He locks Corey in a room and talks about Michael Myers and his knack of specifically targetting babysitters. Scared, Corey kicks the door open. Jeremy, standing just beyond, is knocked off the staircase, and falls to a gruesome death.
Cut back to 2022, it has been four years since Michael Myers killed dozens on Halloween night and escaped, but not before unmasking the true nature of humanity. He has not been seen since. Laurie is busy with her memoir, having finally decided to stop obsessing with Michael. She is blamed by some for reawakening the dormant evil of Michael Myers that inflicted such violence and misery on the town. He, after all, was locked up in a psychiatric hospital for decades.
Corey, meanwhile, was acquitted of killing the kid. The law might have let him go, but society doesn’t. The taint to his reputation has stuck. He is treated with taunts by bullies. Developing a relationship with Allyson (Andi Matichak), Laurie’s granddaughter, he gains courage and one fateful night, decides to fight back. But the bullies, your usual teenagers, throw him off a bridge. He is dragged into the sewers by none other than Michael, who apparently has been inhabiting the subterranean world like a troll under a bridge. Corey is let go by Michael, but he emerges from the sewers a changed man. Laurie spots the same vacant, dead-eyed look on his face that she has seen in Michael for more than four decades.
‘Halloween Ends’ is leagues ahead of your run-of-the-mill slasher fare and asks questions that will make you squirm with discomfort. It is not an easy watch, and as I said above, it will divide audiences (it has already divided critics) right down in the middle. ‘Halloween Ends’ has dark, dark things to say about us. Michael Myers, after all, is a product of our society. He is, of course, much more than that, and his evil is unknowable like Heath Ledger’s Joker in ‘The Dark Knight’. But Laurie knows the evil she herself is capable of, and looks within herself to gauge whether she became a monster not too different from the man she has been fighting her whole life.
It’s not just reflections on abstract concepts, though. For those who came for the gory thrills, you will get the gory thrills. The last half an hour or so of ‘Halloween Ends’ delivers on the 44 years of build-up, finally ending the conflict between Laurie and Michael once and for all.
But it is the thematically-rich storytelling that makes ‘Halloween Ends’ truly special. The character-driven storytelling in a film that is supposed to end a horror-thriller franchise? It doesn’t get ballsier than that.