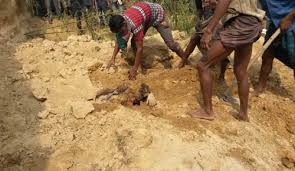 A court here on Monday put an accused in the case over the killing of four schoolboys at Sundrateki village in Bahubal upazila on a 3-day remand.

Senior judicial magistrate Md Kawsar Alam passed the order when Shahed alias Sayed was produced before the court on expiry of his 5-day remand. Earlier, he was put on a 5-day remand on February 25.

A total of six people have so far been arrested in connection with the gruesome murder of the four schoolboys.

Of them, Jewel Miah and his younger brother Rubel Miah made confessional statements before the court under section 164 of the Code of Criminal Procedure.

Meanwhile, another accused, Bachhu Miah, was killed in a gunfight with Rab at Deorgach in Chunarughat of the district early Thursday.

Four schoolboys who had gone missing from Sundrateki village in Bahubal upazila on 12 February were found buried at the village on 17 February.