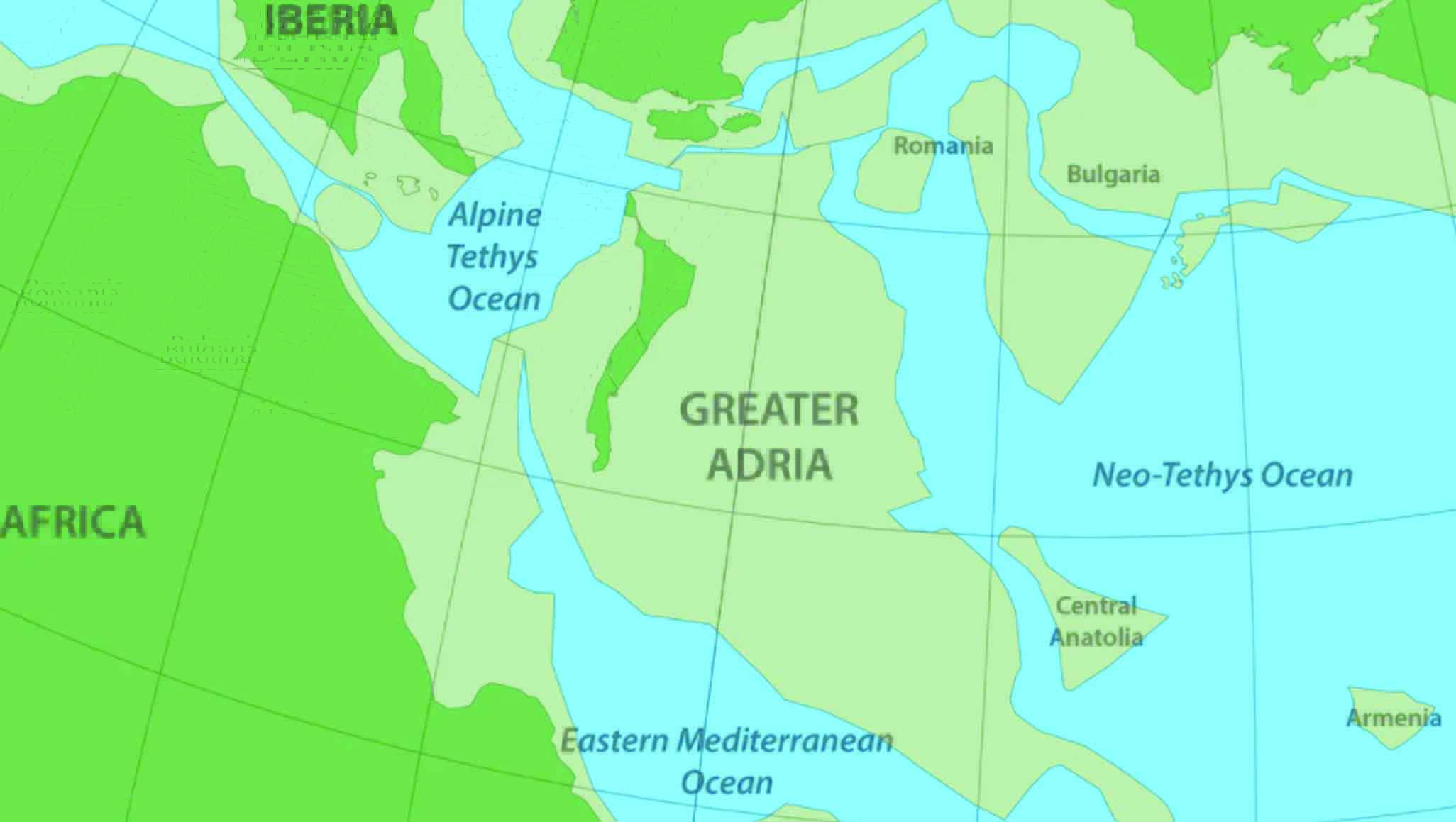 Move over, Atlantis. Not all lost continents are myths; here’s one whose existence has just been verified by science. Greater Adria broke off from North Africa 240 million years ago. About 120 million years later, it started sinking beneath Southern Europe. But bits of it remain, scattered across local mountain ranges. It’s the geological similarities in those mountains that had led scientists to hypothesize the presence of an ancient continent in the Mediterranean. But the region’s geology is so complex that only recent advances in computing—and a 10-year survey by an international team of scientists—were able to produce a geo-historical outline of that former land mass. This is the very first map of the world’s latest lost continent (1). The 100-million-year history of Greater Adria starts nearly a quarter of a billion years ago. The world was a very different place back then. It was just recovering from the Permian-Triassic extinction, which came pretty close to wiping out all life on Earth. The planet was repopulated by the first mammals and dinosaurs.
Supercontinental break-up
Oblivious that biological imperative, Earth’s geology was on a course of its own: fragmentation. At that time, the planet’s land masses had coagulated into a single supercontinent, Pangaea. Around 240 million years ago, a Greenland-sized piece of continental plate broke off from what would become North Africa and started drifting north. Between 120 and 100 million years ago, the continent smashed into Southern Europe. Even though the speed of that collision was no more than 3 to 4 cm per year, it ended up shattering the 100-km thick crust. Most of the continental plate was pushed under Southern Europe and swallowed up by Earth’s mantle, a process known as subduction. Seismic waves can still detect the plate, now stuck at a depth of up to 1500 km. But some of the sedimentary rocks on top were too light to sink, so they were scraped off and got crumpled up—the origin of various mountain chains across the Mediterranean region: the Apennines in Italy, parts of the Alps, and ranges in the Balkans, Greece and Turkey.
Death and birth
Flowing from present to deep past, this time-lapse reconstruction of the geological history of the Mediterranean shows the death and birth (in that order) of Greater Adria in unprecedented amounts of detail.
Some bits of Greater Adria survived both the shave-off into mountainhood and death by subduction. “The only remaining part of this continent is a strip that runs from Turin via the Adriatic Sea to the heel of Italy’s boot,” says Douwe van Hinsbergen, Professor of Global Tectonics and Paleogeography at Utrecht University, and the study’s principal researcher. That’s an area geologists call ‘Adria’, so the team, consisting of scientists from Utrecht, Oslo and Zürich, called the lost continent ‘Greater Adria’. What was the continent like? A shallow continental shelf in a tropical sea, where sediments were slowly turned into rock, Greater Adria possibly resembled Zealandia, a largely submerged continent with bits sticking out (i.e. New Zealand and New Caledonia), or perhaps the Florida Keys, an archipelago of non-volcanic islands. Either way, dotted with islands and archipelagos above the water, and lots of coral below, it was “probably good for scuba diving,” Van Hinsbergen says. It took scientists this long to produce the first map of Greater Adria not just because the Mediterranean is, in the words of Van Hinsbergen, “a geological mess (…) Everything is curved, broken and stacked. Compared to this, the Himalayas represent a rather simpler system.” Greater Adria perished by subduction and scraping-off. The Himalayas emerged by the collision of two continents.
Ore deposits
A reconstruction of Greater Adria, Africa and Europe about 140 million years ago. In lighter green, submerged parts of continental shelves.
A reconstruction of Greater Adria, Africa and Europe about 140 million years ago. In lighter green, submerged parts of continental shelves.
The region also has a complex geopolitical makeup, obliging the researchers to piece together evidence from 30 different countries, from Spain to Iran, “each with its own geological survey, own maps, own ideas about evolutionary history. Research often stops at national borders.”

So what has geology learned from the discovery of Greater Adria?
First off, that its hypothesis was right: Geological similarities across the Mediterranean really did point to a lost continent, now found.
Secondly, the reconstruction of Greater Adria has also taught geologists that subduction is the basic way in which mountain belts are formed.
They’ve also learned a great deal about volcanism and earthquakes, and “(we) can even predict, to a certain extent, what a given area will look like in the far future,” van Hinsbergen says.
Finally, and practically, these insights will help scientists and surveyors to identify and locate ore deposits and other useful materials in mountain belts.

The article ‘Orogenic architecture of the Mediterranean region and kinematic reconstruction of its tectonic evolution since the Triassic’, by Van Hinsbergen e.a., appeared in the latest issue of Gondwana Research (September 2019).

Got a strange map? Let me know at [email protected]

(1) There are plenty of these to go around: mythical ones like Atlantis, Mu, Lemuria and Kumari Kandam; and real ones from geological history like Avalonia, Congo Craton, Kalaharia and Laurentia.

Study: Unattractive people far overestimate their looks
The finding is remarkably similar to the Dunning-Kruger effect, which describes how incompetent people tend to overestimate their own competency.
Stephen Johnson 19 August, 2020
Photo by Chase @jiggliemon Wilson on Unsplash