Govt trying to keep Khaleda away from election: Fakhrul 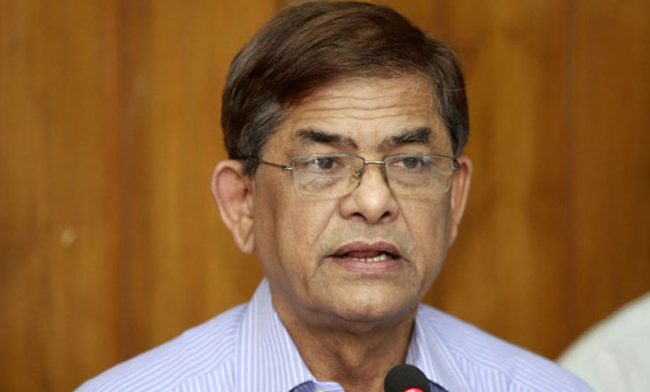 Sejuti Mourin: BNP yesterday alleged the government of trying to dispose BNP chairperson Khaleda Zia’s appeal in the Zia Orphanage Trust graft case in order to keep her away from the national election.“Unprecedented incidents are happening under this government…there’s no instance of giving direction by the Supreme Court to settle any appeal by 3-4 months,” said BNP secretary general Mirza Fakhrul Islam Alamgir during an unveiling event for the cover of a musical CD of a song on Khaleda Zia at Dhaka City unit BNP’s Nayapaltan office.Fakhrul claimed that the government is working to take the Zia Orphanage Trust graft case to the final stage hurriedly.“But it’s unfortunate that the highest court is giving such an order. Judiciary is the last resort for the repressed people, but the government is now trying to use it to make its political gain.”“The government knows it well it won’t be able to resist people’s wave if our leader remains out of jail and resist its debacle if Khaleda Zia joins the next national election. That’s why they’ve kept her in jail in a false and fabricated case in a planned way,” the BNP leader observed.”He alleged that the government rigged votes and barred people from going to polling stations in Tuesday’s Khulna City Corporation election with the help of law enforcers.On Wednesday, the Appellate Division upheld the High Court order which had granted bail to the convicted BNP Chairperson.A four-member bench of the Appellate Division, led by Chief Justice Syed Mahmud Hossain, also issued an order to dispose Khaleda’s appeal petition which challenges the lower court’s verdict.