German industrial output up in June despite sombre outlook 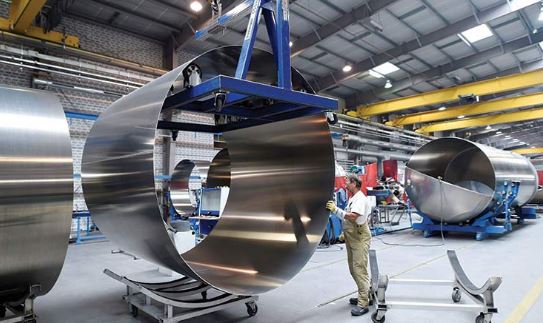 AFP: German industrial production rose gently in June, official figures published Friday showed, as analysts worried about the outlook for Europe’s largest economy.
Factory output was up 0.4 percent from the previous month, federal statistics agency Destatis said in a statement. The agency revised down its estimate for May, showing a small 0.1 percent drop in production instead of a 0.2 percent increase as first reported. Production in Germany was being held back by an “extreme shortage” of components as the war in Ukraine and the lasting impact of the coronavirus pandemic scrambled businesses’ supply chains. Almost three-quarters of companies surveyed by Destatis reported bottlenecks and problems procuring raw materials and components. A sector-wide breakdown showed that production of capital goods increased by one percent in June. The output of semi-finished goods increased by 0.3 percent and that of consumer products was up 1.1 percent.
The June increase was “not enough to reverse declines earlier in the year and left output well below pre-pandemic levels”, said Andrew Kenningham, chief Europe economist at Capital Economics.

Industrial output plunged by 3.7 percent in March as companies reeled from the economic impact from Russia’s invasion of Ukraine in February.