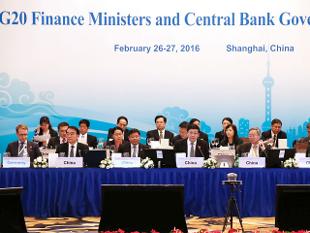 The world’s 20 top economies will agree to use all policy tools to lift sluggish global growth, according to a draft communique obtained by Bloomberg News on Saturday, despite German disquiet over fiscal and monetary stimulus.

The G20 finance ministers and central bank chiefs meeting in Shanghai agreed to use those methods, as well as structural reforms, “individually and collectively” to strengthen growth, investment and financial stability, the draft said, adding fiscal policy will be used “flexibly”.

“The global recovery continues, but it remains uneven and falls short of our ambition for strong, sustainable and balanced growth,” Bloomberg quoted the document as saying.

On Friday, the first day of the meeting, disagreements about the right remedy for slowing global expansion emerged after Germany’s Finance Minister Wolfgang Schaeuble said attempts to boost economies with monetary loosening could be counterproductive and fiscal stimulus — governments spending more or cutting taxes — had run its course.

“Fiscal as well as monetary policies have reached their limits,” he said. “If you want the real economy to grow there are no shortcuts without reforms.”

The United States, Britain, the European Union and China, however, have all backed the use of monetary policy.

The draft communique recognises the challenges posed to the world economy by geopolitical turmoil, and also recognised risks from Britain possibly leaving the EU in a so-called “Brexit”, along with the EU’s mounting refugee crisis.

It nevertheless affirmed that “the magnitude of recent market volatility has not reflected the underlying fundamentals of the global economy”.

The G20 meeting comes amid fears driven by China’s slowing growth, steep falls in world financial markets, and US interest rates having risen for the first time in nine years — while Japan has adopted negative rates.

The draft showed a pledge to “consult closely” on foreign exchange markets, and reaffirmed commitments not to engage in competitive currency devaluations.

There are widespread concerns China could lower the value of its yuan in order to boost exports, though Chinese officials deny any such plans.