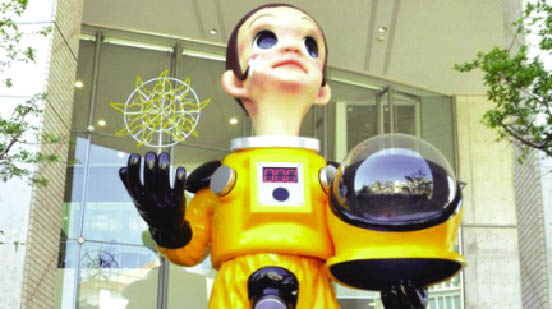 BBC: Fuku-shima residents have reacted angrily to the statue of a boy in protective gear, saying it gives the impression of a city still contaminated after the 2011 nuclear disaster.
Fukushima’s nuclear plant was hit by a tsunami in 2011, causing the most serious such accident since Chernobyl.

The statue was erected in early August and its creator said it was about hope for a world free from nuclear disaster.

Artist Kenji Yanobe has since apologised for making residents uneasy.

According to Japanese news agency Kyodo, angry citizens took to Twitter and called the authorities directly, demanding for the statue to be removed as it would harm the reputation of Fukushima.

The statue is named “Sun Child” and can be found outside Fukushima’s train station. It depicts a boy wearing a yellow hazmat suit, holding his helmet in one hand and a sun symbol in the other.

A monitor counter on his chest displays the numbers “000” to show there is no radiation.

“I wanted to make a work that encourages people… and made the statue of a child standing up bravely and strongly against any difficulties it faces,” Mr Yanobe said, according to Kyodo.