Stuck in my mind From Rebel to Founding Father: a book that will burgeon our respect further The month of August had put a scare on the heart of those Bangladeshi people who always believe in the sovereignty of Bangladesh. 15th August 1975, is the day which remains as the darkest hour in the history of the Bangladesh. The leader of the nation, the prolific writer of the freedom struggle of Bangladesh and a man who never gave up his ideology even in the most toughest events in his life was brutally assassinated, including his family members except two of his daughters who were in Europe that time on that horrific day.

On the first week of August this year, I was gifted a book on father of the nation Sheikh Mujibur Rahman by Special Assistant to the Prime Minister, Mahabubul Haque Shakil. It is a supreme article one can except from a respected individual. The book titled ‘ From rebel to founding father’ is Penned by Syed Badrul Ahsan. As a homage to the father of the nation, I am trying to give a review of the book.

The author of the book, Syed Badrul Ahsan is the executive Editor of ‘ The Daily Star’, Bangladesh. Born in 1954, he studied English literature at Dhaka University. He has been minister (press) at the Bangladesh High commission London and a speechwriter for Sheikh Hasina. At present, a Fellow at the Jawaharlal Nehru Institute of Advanced studies, at Jawaharlal Nehru University, New Delhi. He is doing a comparative study of the contributions of the three major political figures – Chittaranjan Das, Subhas Chandra Bose and Sheikh Mujibur Rahman. 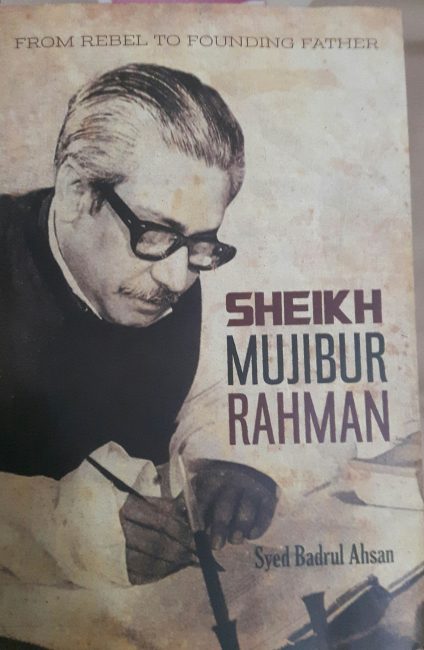 In almost 300 pages , the writer has prearranged us the scenarios of the rise of  Our father of nation, Sheikh Mujibur Rahman significantly. The political history of the book narrates from Partition of India till the assassination of the Father of the nation. Divided into 7 parts, the book focuses on the significant events that had taken place during 1940’s to 1975. In this prolific work, one will feel the events from this span reels in front of his eyes. I felt the book is a candid work of the writer and a extremely scrutinizing  researched one. Many books are accessible on our Father of the nation but this one will give us reason why it’s a diverse work. The most imperative object about this book is that it’s an effortless read and will exert a pull on different age groups.

There are some unique remarks on our Father of the nation in the book , from which I will try to give a brief summary. This book starts with the initial engagement of Sheikh Mujib in the political events of Pakistan. In more instances than one, it was Mujib who shaped the circumstances of the country. He was able to charmed the two significant political leader A.K. Fazlul Haque and Huseyn Shaheed Suhrawardy , with his seriousness at an early age When they visited his school. His sparks were instantly recognized by the prominent leaders.  Mujib proved to be diligent , faithful political worker the likes of whom who were to come in  handy as the riotous struggle for Pakistan gathered stream. After the creation of Awami Muslim league, he quickly made his way to the hamlets and villages of East Pakistan popularizing the programs of the party which will remain as his style for all his life. There are abundant stories of how he remembered the names and faces of people throughout his life. For Mujib, the politics of Awami Muslim league fundamentally signalled the emergence of the Bengali voice in Pakistan.

During the language movement of February 1952 , Mujib’s refusal to eat in Dhaka central jail was proving to be an embarrassment for the government. Mujib’s Hunger strike lasted thirteen days and was to include the moment when the police actually fired on the students.

His fiery speeches at public rallies throughout the country were already being remarked upon. The down to earth , often rustic language he employed was revealing the transformation he was going through. Mujib was an admirer of such past Bengali heroes as Subhas Chandra Bose and Chittaranjan Das.

In the 1954, provincial election when Mujib , at a personal level defeated Muslim League politician Wahidduzzaman in his native Faridpur region, it was the beginning of the long political journey for the young general secretary of the Provincial Awami League. On 15 May, more than two months after the United Front had beaten the Muslim League, Mujib was given a berth in the cabinet now led by the new Chief minister , Fazlul Haq. As minister for agriculture and forests, Mujib was for the first time in his political career in an administrative position.

When Ayub Khan imposed martial rule in Pakistan, in all the years remained of united Pakistan, relations between the army and Mujib would grow extremely fraught and would in the end reach a point of severe collision. The 1958 coup came in the way of all the plans the Awami league and Mujib may have had about the future autonomy of East Pakistan. Right till the end , Mujib was unable forgive the Pakistan Army.

The Ayub regime put a ban on the works of Rabindranath Tagore in 1961. Mujib remarked that, the move against Tagore was an assault on the cultural and political heritage of the people of East Pakistan.

The death of Suhrawardy but Mujib in the lead. In all the years he had spent in the Awami League, it was loyalty to Suhrawardy that had kept Mujib under restraint. Mujib was focusing more on the advantages that the Bengalies could derive from a return to democracy. By the end of 1963, he had already referring to his province as Shonar Bangla, in his speeches.He used every spell of freedom to make increasingly inflammatory speeches against the government of Ayub Khan. Followed everywhere by intelligence agents of the government, he was prepared to be arrested anywhere and at any time of the day.  In the 1960’s the rise of the extremism of the sort the Naxalities had already unleashed in the West Bengal, the Awami league , under Mujib, was not willing to see itself turning into irrelevance. Hence Mujib was emphasizing on the Six point Program. Mujib was blunt about the way he saw politics shaping up or collapsing in Pakistan and had not been averse to pointing at its corruption by the army.

When the West Pakistani regime saw the rise of Mujib as unprecedented influential political leader of East Pakistan, they tried to curb the activities of Mujib by framing him with the infamous Agartala Conspiracy case. But as the trial of this case going on, the failure of the Army regime already made Mujib the most significant leader of East Pakistan of all time. When the 1970’s national election under the Yahya Khan regime saw Mujib emerging as the future Prime minister of Pakistan by sweeping majority number of seats, the West Pakistani political leaders were stunned and were afraid that Mujib will put his influence on the whole of Pakistan.

The consequences of the radical actions of Yahya Khan on 25th March of 1971 were drastic for Pakistan. Mujib was arrested and taken as prisoner to Pakistan. Before leaving and anticipating the moves of the Army regime, Mujib already declared the independence of Bangladesh. After nine months of Bloody war and with the sacrifice of 30 lacs lives Bangladesh achieved victory in the liberation war from Pakistan.

It was undoubtedly, Mujib who dreamt of a free Bangladesh. All his life he sacrificed everything and all his interests to see his motherland free and prosperous. After becoming the Prime Minister of Bangladesh, When he was trying to take the country to unprecedented glory, it was then some misled army officer led a coup d’état and assassinated the Father of the nation with most of his family members. Bringing the stories related to his rise, achievements , sacrifices and ferocious leadership the book, is a must read for all.