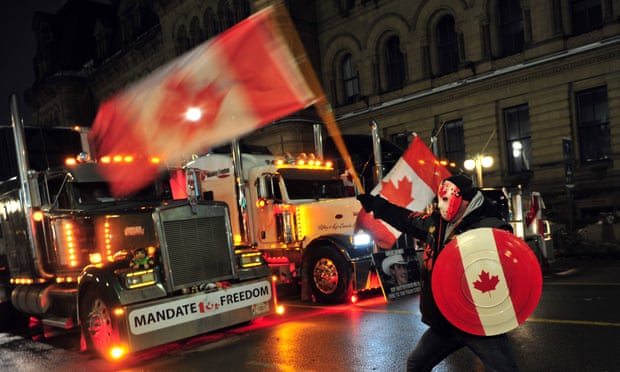 It only took six dozen trucks, and a few hundred protesters to bring Canada’s capital to a standstill and close a critical border crossing with the US, throttling the car industry that straddles the line between both countries and relies on a constant flow of trade.
On Saturday, Canadian authorities finally began taking action to clear the Ambassador Bridge into the US, the busiest land crossing in North America, which had been blockaded by just over a dozen trucks and smaller vehicles, and a crowd a few hundred strong.
The bridge has been closed for the best part of a week now, and meanwhile downtown Ottawa has been under a form of siege for more than a fortnight, blockaded by crowds gathered under the banner of opposition to Covid regulations.
The protest has melded genuine grievances and fears about how the pandemic has upended lives with conspiracy theories and racist extremism, helped by some degree of funding from abroad. A handful of demonstrators have turned up with Trump banners and Confederate flags.
The seductively open-ended rallying call for a “freedom convoy” has sparked an unlikely global movement. Around the world other police forces were moving this weekend to clear or block copycat actions.
New Zealand police used a sound system playing Barry Manilow songs to tackle a gathering in Wellington, and in France thousands of police fanned out to motorway tollbooths around Paris to stop a “convoi de la liberté” from getting into the city, and used teargas on protesters in the Champs-Élysée.
“The right to demonstrate and to have an opinion is a constitutional right guaranteed in our republic and in our democracy the right to block others or stop them from coming and going is not,” said prime minister Jean Castex. “If they block the traffic or try to block the capital we will be very strict.”
In North America, authorities are drawing up longer-term plans to tackle truck convoys, whose organisers have floated the idea of trying to barricade events from the Coachella music festival to the Super Bowl, and mooted a convoy from California to Washington DC.