France is on a dangerous collision course with its Muslim population 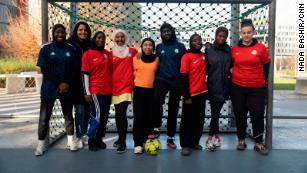 French lawmakers last month voted to ban women and girls from wearing hijab while playing sports — showing the world once again that when it comes to further politicizing, targeting and policing European Muslim women, our clothing choices and bodies, France is in a league of its own.
The French Senate voted 160 to 143 in favor of the ban on wearing the hijab and other “conspicuous religious symbols” in sports competitions. The amendment was proposed by the right-wing Les Républicains, which argued the hijab could risk the safety of athletes wearing it while playing sports.
You really couldn’t make this up.
In France, Muslim women using their agency, and exercising their human rights to wear what they choose to wear, is deemed a safety risk. France’s attempt to apparently liberate and save Muslim women from ourselves and our headscarves is a racist and colonial project dressed up as upholding the country’s secular values. The project heaps Islamophobic harm on Muslim women.
Indeed, it is misogynistic and hateful to force women to remove hijab as much as it is misogynistic and hateful to force women to wear hijab.
The proposed ban is opposed by Emmanuel Macron’s government and French lawmakers expressed “regret” over the government’s “lack of will” to put a stop to what they describe as the “development of Islamism in sport,” CNN reported. It comes against the backdrop of a forthcoming presidential election in April, where France’s domestic politics continue to lurch further to the right, and many Muslim residents and communities of color are being subjected to divisive and toxic political rhetoric on Islam, immigration and race.
In just two years, France is also hosting the Olympics, meant to bring nations together in a united show of inclusivity on the world stage. A divisive and discriminatory hijab ban only shines a further spotlight on how ill at ease France is with building a modern multiculturalism state.
The proposed law will now be revised by the National Assembly, which is expected to have the final word. All of which means that, for now, Muslim women playing sports in hijab have been given extra time to do so with the bill prevented from being passed in its current state.
France is home to roughly 5.7 million Muslims and the largest Muslim population in Europe, according to the Pew Research Center. As of 2019, 31% of French Muslim women were wearing hijab, according to Statista, so this sports ban will have a profound impact on many women. Yet again, French lawmakers have chosen to continue on a dangerous collision course with the country’s Muslim population and especially French Muslim women.
The attempts to ban Muslim women from wearing hijab while playing sports is viewed by many Muslim women and activists I’ve spoken to as taking a page straight out of the Afghan Taliban and Iranian regime’s playbook by denying women their own agency. This ban is viewed as being about much more than denying women the right to play sports, if that wasn’t outrageous enough.The sports hijab ban is about further dehumanizing, minimizing and erasing French Muslim women who choose to wear hijab. It makes Muslim women targets of state-sanctioned gendered Islamophobia and right-wing hate.
I’m one of three British Muslim women campaigners and passionate football fans calling ourselves “The Three Hijabis.” Last summer, alongside Amna Abdullatif and Huda Jawad, I launched a viral petition calling on England’s Football Association, the British government and tech companies, to work on banning racists from football for life, following the abuse inflicted on three young Black England players after the Euro finals at Wembley against Italy.