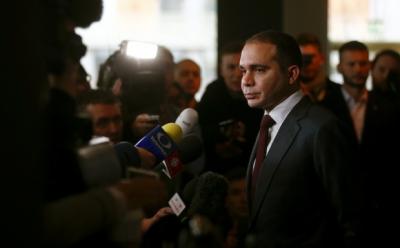 The United States Soccer Federation said Thursday it would vote for Prince Ali bin Al Hussein to be the new head of FIFA, the scandal-torn governing body of world football.

US Soccer president Sunil Gulati announced the decision on Twitter.

“USSoccer will vote for AliforFIFA for President of FIFA,” Gulati tweeted, after posting earlier on the social media site that US officials had “good meetings with all 5 of the FIFA candidates this evening in Zurich”.

Canada Soccer also announced their intentions for Friday’s vote in
Switzerland to replace Sepp Blatter, issuing a statement saying they would vote for Gianni Infantino, the general secretary of European football bloc UEFA.

“Canada Soccer continues to firmly support all efforts to govern the game in a better way and welcomes the adoption and implementation of reforms that are critical to ensuring the future of the sport,” the Canadian federation said in a statement.

“The Canada Soccer Board of Directors has voted unanimously to cast their ballot for Gianni Infantino for FIFA President as the best candidate to implement the governance reforms and bring FIFA back to its focus – the sport of football.”

Both the United States and Canada are members of CONCACAF, the
Confederation for North and Central America and the Caribbean, which has been at the center of the corruption crisis in world football.

The regional body announced reforms after a meeting in Zurich on Thursday, where officials confirmed it would not endorse a particular candidate.

Football’s multi-billion dollar world governing body has been in turmoil since the arrest of seven football officials in Zurich at a Congress last May over more than $200 million (182 million euros) paid in bribes.

Prince Ali, the Jordan federation president who lost to Blatter in last year’s election, tweeted his thanks in response to Gulati.

“I am proud to receive the support of USSoccer, joining my vision for a new, transparent, fair and honest FIFA that puts football first,” he posted.