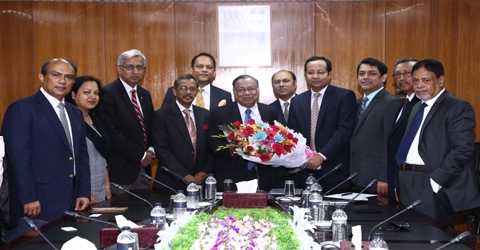 The Foreign Minister gave a patient hearing to the BMCCI leaders and assured them of providing all possible support to increase Bangladesh’s export to Malaysia.

The assurance came when the members of the Board of Directors of the bilateral chamber, led by its President Md Alamgir Jalil, met the Foreign Minister at his office at the Ministry, said a press release.

Ali also thanked the BMCCI leaders for their appreciable roles in promoting bilateral trade relations between Bangladesh and Malaysia and assured his ministry’s all-out support to all BMCCI activities.

The total volume of the two-way trade between Bangladesh and Malaysia has reached US$ 1,314.60 million: while Bangladesh’s export is only US$ 114.60 million against Malaysia’s US$ 1.2 billion export to Bangladesh is the fiscal year 2014-2015.

The BMCCI President said economic diplomacy is a must to increase trade and development of both the countries leading to Malaysian manufacturing units relocating to Bangladesh taking advantage of lower wages.

“Bangladesh will greatly be benefited by the employment opportunities it will create improving the economy and living standard of the nation,” he said.

The issue of 4th Showcase Bangladesh 2016, to be held on May 17-19 at Kuala Lumpur Convention Centre (KLCC) was also discussed.