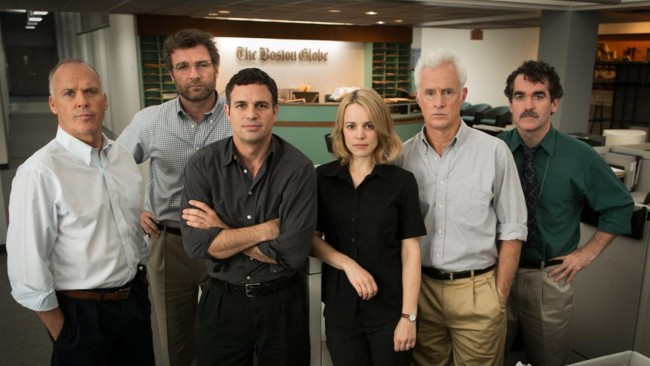 Every once in a while, a movie comes along our way and its bold and compelling storyline sweeps through the masses of eager minds. Spotlight has all the components that a movie needs to grab viewers and keep them at the edge of their seats. The documentary styled movie has picked up six Academy Award nominations and grabbed the Best Picture Award and the Best Original Screenplay award, taking the world by storm.
The movie, based on a true story follows the reporters from The Boston Globe as they follow leads in order to publish an expose on the claims of the Catholic Church trying to cover up scandals that originate from their priests committing pedophilia and sexual abuse on young churchgoers. After trying to expose one priest for committing pedophilia, the teams of investigative journalists who call themselves “Spotlight” realize that the Catholic Church had been trying to cover this up, along with numerous other incidents where their priests were guilty of child abuse, scarring the churchgoing children for the rest of their lives.
Instead of exposing these priests, the Catholic Church had them sent to rehabilitation centers coordinated by the Church and made sure their crimes could not be tracked. The story takes you along the whole process of the investigation, the problems they face while publishing the story and the aftermath as the journalists from the Boston Globe struggle to find witnesses to testify about their experiences.
Directed by Tom McCarthy and starring big names such as Mark Ruffalo and Michael Keaton, it’s easy to see why this movie has earned the applause of critics. The direction and screenplay is absolutely spot on, with varying degrees of suspense all throughout the movie as the investigation proceeds. The fact that this movie is based on an actual story makes it even more interesting. Overall, there are very few movies that can have a lasting effect on the viewers. Spotlight, being one of those movies that really make you think about the issues surrounding child abuse will have an enduring impact on you.