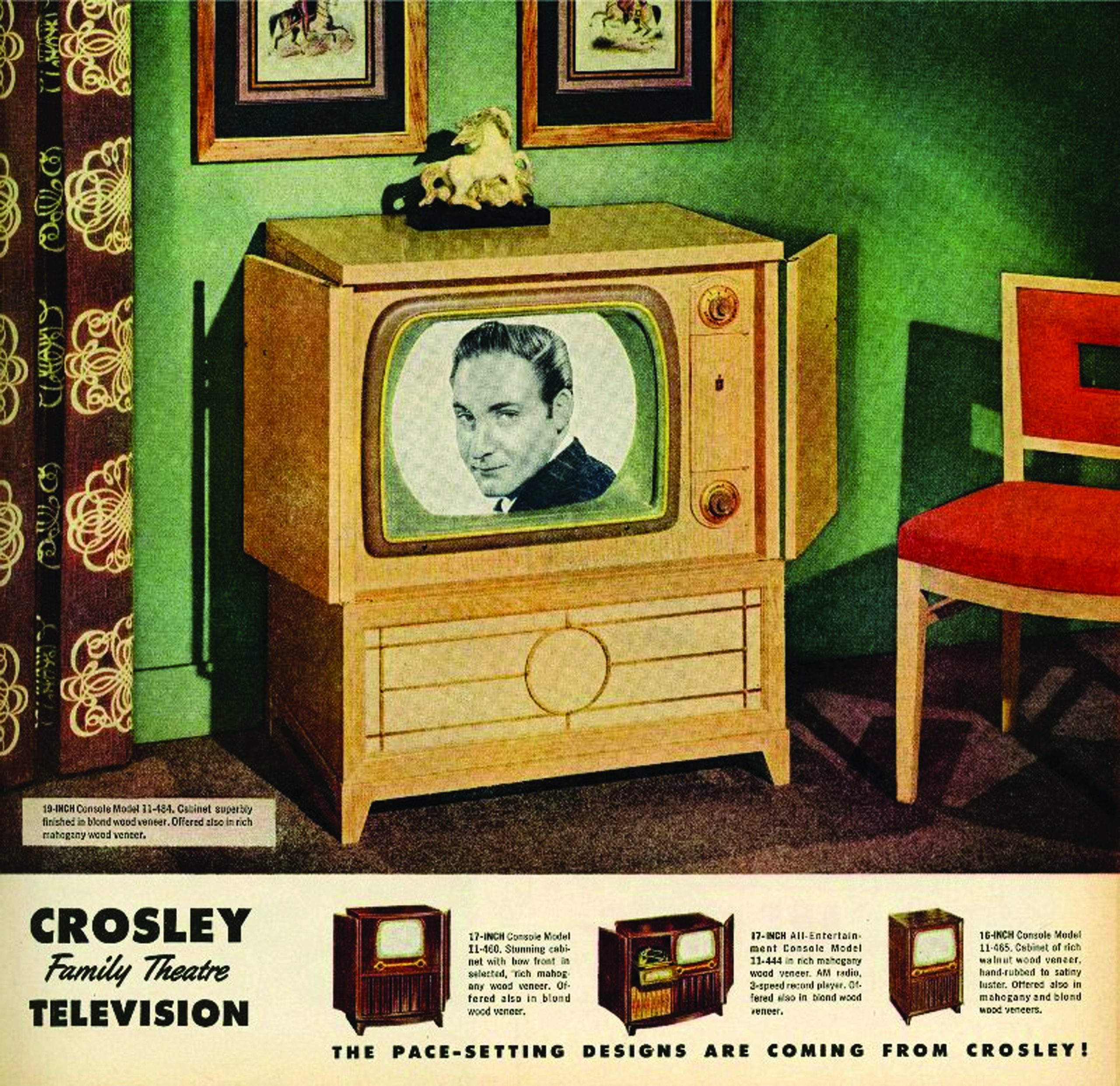 Television was introduced to Americans in 1939 and began to gain a foothold after the Second World War. In the 1950s, the sale of TV sets and the boom in programming made TV America’s favorite source of entertainment.
In 1950, just under 20 percent of American homes contained a TV set. Ten years later, nearly 90 percent of homes contained a TV—and some even had color TVs.

The number of TV stations, channels, and programs all grew to meet this surging demand. The 1950s truly were the golden age of television. To attract buyers, manufacturers and advertising agencies created many interesting ads that tried to convince people to buy a TV set. Some of these cool TV ads are collected in this article. Early electronic television sets were large and bulky, with analog circuits made of vacuum tubes. As an example, the RCA CT-100 color TV set used 36 vacuum tubes.

Following the invention of the first working transistor at Bell Labs, Sony founder Masaru Ibuka predicted in 1952 that the transition to electronic circuits made of transistors would lead to smaller and more portable television sets.
The first fully transistorized, portable solid-state television set was the 8-inch Sony TV8-301, developed in 1959 and released in 1960. However, the first fully transistorized color TV set, the HMV Colourmaster Model 2700, was released in 1967 by the British Radio Corporation. This began the transformation of television viewership from a communal viewing experience to a solitary viewing experience. By 1960, Sony had sold over 4 million portable television sets worldwide.

By 1949 Americans who lived within range of the growing number of television stations in the country could watch, for example, The Texaco Star Theater (1948), starring Milton Berle, or the children’s program, Howdy Doody (1947). They could also choose between two 15-minute newscasts CBS TV News (1948) with Douglas Edwards and NBC’s Camel News Caravan (1948) with John Cameron Swayze (who was required by the tobacco company sponsor to have a burning cigarette always visible when he was on camera). Many early programs such as Amos ‘n’ Andy (1951) or The Jack Benny Show (1950-65) were borrowed from early television’s older, more established Big Brother: network radio. Most of the formats of the new programs newscasts, situation comedies, variety shows, and dramas were borrowed from radio, too.
NBC and CBS took the funds needed to establish this new medium from their radio profits. However, television networks soon would be making substantial profits of their own, and network radio would all but disappear, except as a carrier of hourly newscasts.
Ideas on what to do with the element television added to radio, the visuals, sometimes seemed in short supply. On news programs, in particular, the temptation was to fill the screen with “talking heads,” newscasters simply reading the news, as they might have for radio.For shots of news events, the networks relied initially on the newsreel companies, whose work had been shown previously in movie studios.
By the mid-1950s, television programming was in a transitional state. In the early part of the decade, most television programming was broadcast live from New York City and tended to be based on the theatrical traditions of that city.
Within a few years, however, most of entertainment TV’s signature genres—situation comedies, westerns, soap operas, adventures, quiz shows, and police and medical dramas—had been introduced and were spreading across the network schedules.
Much of this change had to do with the fact that the center of the television production industry was moving to the Los Angeles area, and programming was transforming accordingly: the live theatrical style was giving way to shows recorded on film in the traditions of Hollywood.