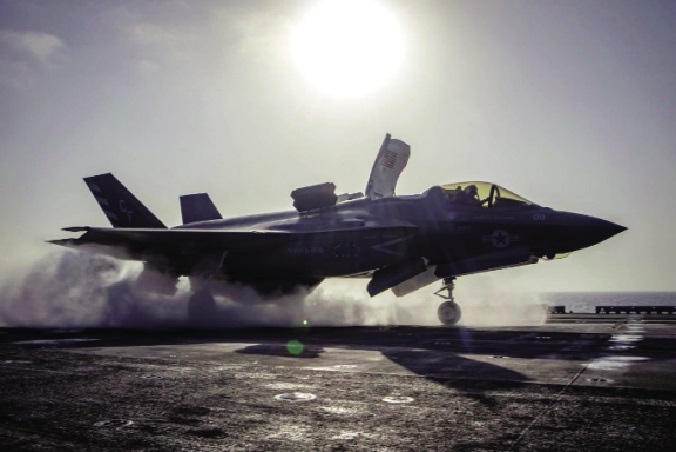 Star Stripes
The F-35 Lightning II stealth fighter jet, the U.S. military’s most expensive weapon ever produced, was used Thursday for the first time in a combat mission, striking a Taliban target in Afghanistan, defense officials said.
The Marine Corps’ F-35B variant of the aircraft carried out the strike on a static target in support of ground clearance operations after flying from the USS Essex, an amphibious assault ship now positioned in the U.S. Central Command area of operations, according to statements from U.S. Naval Forces Central Command and the Marine Corps. The ground force commander deemed the strike successful, according to the statements.
“The F-35B is a significant enhancement in theater amphibious and air warfighting capability, operational flexibility, and tactical supremacy,” Vice Adm. Scott Stearney, commander of U.S. Naval Forces Central, said in a statement. “As part of the Essex Amphibious Ready Group, this platform supports operations on the ground from international waters, all while enabling maritime superiority that enhances stability and security.”
Officials at the Pentagon declined to disclose where the strike took place in Afghanistan, how many F-35Bs were involved in the operation or why the fighter jet was chosen for the mission.
The Marine version of the aircraft is capable of conducting short takeoffs and vertical landings like a helicopter. The Air Force and Navy have their own versions of the aircraft but have yet to use them in combat operations.
The F-35B that conducted the strike was deployed as part of the Marine Corps’ 13th Marine Expeditionary Unit, which was the Marines first combat-deployed unit to replace the aging AV-8B Harrier attack jets with the F-35B, according to the service.
CNN first reported the Essex, which can carry up to six F-35Bs, was in position this week to put the fifth-generation fighters into combat.
Lockheed Martin began production of the F-35 in 2006, a program marred by cost overruns and delays. The F-35 program is expected to cost the Pentagon about $406 billion for 2,456 fighter jets that the services intend to buy, according to the F-35 Joint Program Office.