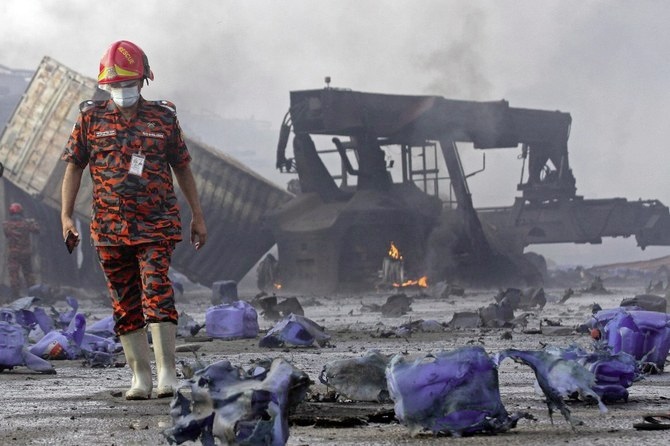 As Bangladeshi authorities investigate the causes of a deadly cargo depot fire that shook the country earlier this month, scientists have warned that the disaster will have a longer-term impact on the environment and health of local communities.
More than 40 people were killed and 200 injured — mostly port workers and firefighters — in the fire and subsequent explosions at the depot in Sitakunda, near the southeastern port of Chittagong, which handles most of the country’s garment exports.
The fire that broke out on June 4 and took three days to douse was one of the country’s worst industrial disasters in years.
Authorities have not determined the exact cause of the fire but said that leakage from a container of hydrogen peroxide was likely the source of the initial blaze. An official report is expected to be released this month.
Environmental assessment may take longer. The testing of samples from the area is underway, but Prof. Mohammad Aftab Ali Sheikh, chairman of the Bangladesh Council of Scientific and Industrial Research, said that it was already clear that the region will be affected, especially its soil and water bodies.

“Definitely the explosion and fire have some subsequent impacts on the environment in that area. The soil of that area will be contaminated through the water mixed with different chemicals. A portion of chemical-mixed water has flown to water bodies, which will create some hazards. In addition, that area witnessed some rainfall also which carried this chemical-mixed water to the rivers,” he told Arab News on Wednesday.
Air pollution resulting from the fire may reach places hundreds of kilometers away. “The gas generated from the explosions and burning had spread over in the air. This air might have flown over the adjunct districts,” Sheikh said. “It might even travel to Dhaka.”

In the depot area, increased air pollution has already been observed.
“We have noticed increased dust particles in the air of the Sitakundu area,” Mofidul Alam, director of Chittagong Division Department of Environment, said. “This dust will have some negative impact on the trees, plants and biodiversity of this area.”
The disaster reflected the haphazard safety standards that continue to affect Bangladesh. The country already has a devastating track record of industrial accidents, including factories catching fire with workers trapped inside.
Its deadliest fire was in 2012, when a blaze swept through a garment factory in Dhaka, killing 112 workers. Last year, a huge blaze engulfed a food and beverage factory, also in the capital, killing at least 52 people.
The fire department told Arab News last week that from initial observations, it appeared that safety guidelines and precautions were likely ignored at the depot.

Mohammad Manikuzzaman, assistant director at Bangladesh Fire Service and Civil Defense, said that authorities had “only noticed a few fire extinguishers inside the depot” and nothing else related to fire preparedness.
But it was not only the preventive measures that were lacking.
Environmental scientist Sharif Jamil, who serves as secretary general of Bangladesh Poribesh Andolon, a civic movement to protect the country’s environment, said that there should be special zones for handling any type of chemicals, but that such standard practices have been ignored — and not only at the cargo depot.
“These types of explosions are not only causing deaths of human beings. The aftermath of these accidents have a long-term effect on air, soil and water,” he told Arab News.

“We need to prepare some particular zones to handle sensitive chemicals with proper preparedness and monitoring by the management. Otherwise, these types of incidents would take place again and again.”