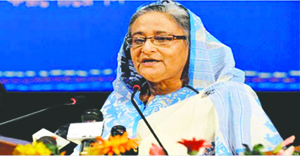 Underscoring the need for further enriching Bangla, Prime Minister Sheikh Hasina on Sunday called for building massive awareness to avoid distortion of the mother language.
“We want people to know different languages, but in doing so there shouldn’t be any distortion of our language, and everyone should remain aware and cautious in this regard. Massive awareness should be created among people,” she said.
The Prime Minister was inaugurating a four-day programme marking the International Mother Language Day 2016 and the Martyrs’ Day at the International Mother Language Institute in the city.
Education Secretary Md Sohrab Hossain delivered the address of welcome at the function held with Education Minister Nurul Islam Nahid in the chair.
Eminent economist and Bangladesh Bank Governor Dr Atiur Rahman presented the keynote paper on ‘Ekushey February: Bangali Mononer Batighor’ while Unesco head to Bangladesh Beatrice Kaldun and Director General of International Mother Language Institute Prof Zinat Imtiaz Ali spoke at the function. Earlier, a one-minute silence was observed in memory of those who had laid down their lives for the sake of the mother tongue. The Education Minister also handed over to the Prime Minister Unesco’s paper recognising the International Mother Language Institute as a Category-2 institute.