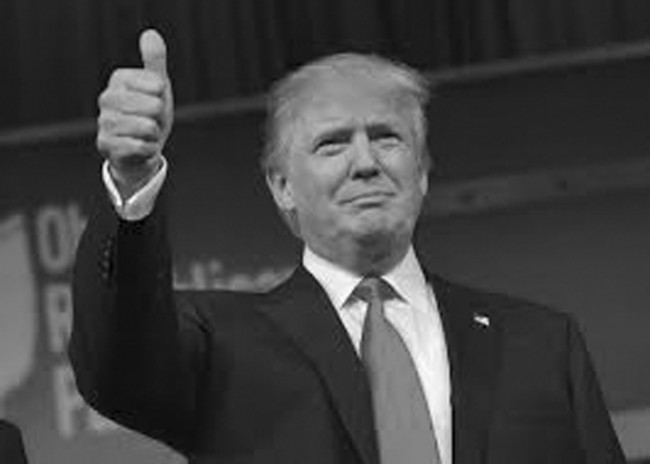 Donald Trump is a very different person compared to any other presidential candidate. Starting from to the limited range of vocabulary to the disjointed sentence structure that he uses in his speech, Trump demonstrates a unique persuasive style. According to a linguist of University of Pennsylvania, Donald trump has a habit of repeating certain words and phrases as he speaks. In an interview, he used the phrase “bomb these sites” again and again for three times:
“Well, if I were president, we probably wouldn’t be in the problems we have right now,
because it’s incredible — we have an attack, and then all of a sudden, we bomb all these sites. Why didn’t we bomb the sites before? We should have bombed the sites a long time ago.”
Furthermore, Jennifer Sclafani, a Georgetown University linguist, mentioned that she found repetitive, straightforward groups of words in Trump’s speech. She quoted Trump from the February 25 Republican debate:
“But, we either have a country, or we don’t have a country. We have at least 11 million people in this country that came in illegally. They will go out. They will come back — some will come back, the best, through a process. They have to come back legally. They have to come back through a process — and it may not be a very quick process, but I think that’s very fair, and very fine.”
However, this usage of jumbled-up sentence structure might attract the ordinary people of the country. This simple nature of Trump might speak in favor of him as it displays that he is reliable and honest, which might appeal to voters. Moreover, his command of language stands out amongst his adversaries. In the March 3 Republican debate held in Detroit, Donald answered back to Marco Rubio, saying that Rubio told him that his hands were small, and that this meant something else, something which is related to manhood, must also be small. Marco further added that Donald had scoffed at everyone, including disabled people, in this campaign. Rubio believed that Trump deserves to be harassed by the same way that he had harassed people in the campaign. Donald Trump may be hated figure in the world today, but his personality maybe an authentic one, which other presidential candidates lack.