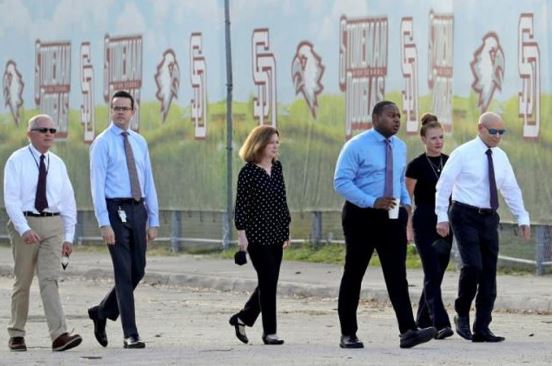 AFP: A jury deciding whether to impose the death penalty on the killer of 17 people at a Florida high school visited the still-bloodstained and bullet-scarred building on Thursday where the shooting occurred.
The 12 jurors and 10 alternates hearing the case against Nikolas Cruz, 23, spent just over 90 minutes inside Marjory Stoneman Douglas High School in Parkland, the South Florida Sun Sentinel and Miami Herald reported.
The visit by the jurors to the building, which has been kept intact by prosecutors as a crime scene, took place under high security. A pool of journalists was allowed to tour the building afterwards but were barred from taking photographs. The Miami Herald said dried blood stained the floor in one classroom where three students were shot dead.In another room, desks were pockmarked with bullet holes and laptops, headphones and water bottles remained where they were left on Valentine’s Day 2018, the day of the shooting.
Cruz pleaded guilty in October to carrying out the shooting and the jury is deciding only whether he should be executed or receive life in prison.