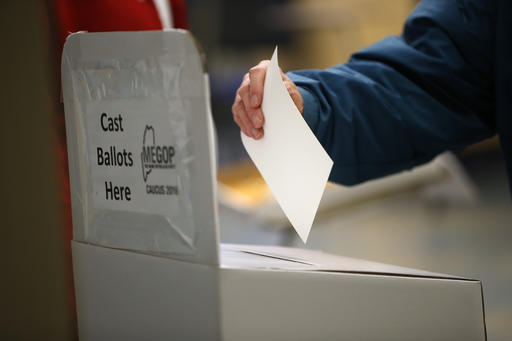 Ted Cruz and Donald Trump each captured two victories in Saturday’s four-state round of voting, fresh evidence that there’s no quick end in sight to the fractious Republican Party race for president.

On the Democratic side, Bernie Sanders won in Nebraska and Kansas, while front-runner Hillary Clinton took Louisiana, another divided verdict from the American people.

Cruz, a Texas senator, claimed Kansas and Maine, and declared it “a manifestation of a real shift in momentum.”

Trump, still the front-runner in the hunt for delegates, took Louisiana and Kentucky.

In the overall race for Republican delegates, including partial results for Kansas, Trump led with 347 and Cruz had 267. Rubio had 116 delegates and Kasich had 28. Cruz will collect at least 36 delegates for winning the Republican caucuses in Kansas and Maine, Trump at least 18 and Rubio at least six and Kasich three. It takes 1,237 delegates to win the Republican nomination for president.

Overall, Clinton had 1,104 delegates to Sanders’ 446, including superdelegates — members of Congress, governors and party officials who can support the candidate of their choice. It takes 2,383 delegates to win the Democratic nomination. There were 109 at stake on Saturday.

Cruz, a favorite of the ultraconservative tea party movement, attributed his strong showing to conservatives coalescing behind his candidacy, calling it a “manifestation of a real shift in momentum.”

With the Republican race in chaos, establishment figures frantically are looking for any way to derail Trump, perhaps at a contested convention if no candidate can get enough delegates to lock up the nomination in advance. Party leaders — including 2012 nominee Mitt Romney and 2008 nominee Sen. John McCain — are fearful a Trump victory would lead to a disastrous November election, with losses up and down the Republican ticket.

“Everyone’s trying to figure out how to stop Trump,” the billionaire marveled at an afternoon rally in Orlando, Florida, where he had supporters raise their hands and swear to vote for him.

Despite the support of many elected officials in Kansas, Florida Sen. Marco Rubio came up short, raising serious questions about his viability in the race. Cruz suggested it was time for some Republican candidates to quit the race.

In Maine, Cruz won by a comfortable margin over Trump. Republicans and Democrats also were voting in Louisiana on Saturday.

On the Democratic side, meanwhile, Sanders won by a solid margin in Nebraska and Kansas officials said he’d won the state caucuses, giving him seven victories so far in the nominating season. Clinton, who’s been doing well with African-American voters, had an easy win in Louisiana.

Clinton hoped that strong support among African-Americans in Louisiana would propel her to victory. Vermonter Sanders, trailing far behind Clinton in the delegate count, had higher hopes of making progress in Nebraska and Kansas, where the Democratic electorate is less diverse.

With Republican front-runner Trump yet to win states by the margins he’ll need in order to secure the nomination before the Republican convention, every one of the 155 Republican delegates at stake on Saturday was worth fighting for.

It was anger that propelled many of Trump’s voters to the polls. “It’s my opportunity to revolt,” said Betty Nixon, a 60-year-old Trump voter in Olathe, Kansas. She said she liked the businessman because “he’s not bought and paid for.”

Overall, Trump had prevailed in 10 of 15 contests heading into Saturday’s voting. Rubio had one win in Minnesota.

Rubio and Ohio Gov. John Kasich both pinned their hopes on winner-take-all contests on March 15 in their home states.