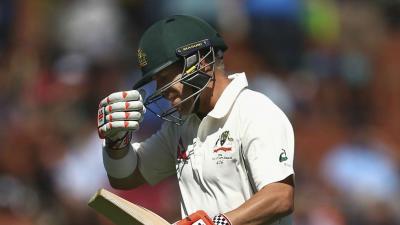 David Warner has hit out at “derogatory and vulgar” taunts from New Zealand fans during their recent tour while making clear Australia will not be toning down their on-field aggression.

Australia sealed a 2-0 series victory over New Zealand to reach the top Test ranking on Wednesday in Christchurch in a match marred by a
confrontation between captain Steve Smith and paceman Josh Hazlewood and the umpire.

Smith was charged by the International Cricket Council and fined 30 percent of his match fee for showing dissent, while Hazlewood was fined 15 percent for his outburst.

With tensions still running high, Warner said he was disappointed security did not do more to rein in abuse from the crowd, which he claimed included remarks about players’ wives and children.

“It doesn’t matter if you’re home or away, you’re going to cop some form of abuse, but we don’t expect to be hounded for six or seven hours,” he told national radio on Thursday.

“Some of the stuff was pretty derogatory and pretty vulgar and the
upsetting thing was the fact that I know if my two daughters were in the crowd, I wouldn’t want them listening to that sort of stuff.

“We go out there and we don’t expect to be abused every single minute of the game, but it goes with sport in general.”

He did not say exactly what was said, but complained that “when they’re talking about people’s families and stuff it takes it a little bit too far and some of the boys raised the issue”.

While the crowd behaviour irked the vice-captain, who has two young
daughters, he said it would not stop Australia playing an aggressive style of cricket.

“We have a passionate brand,” he said. “If you look back at the history of Australian cricket we have an aggressive style. We’ve got to keep playing our brand of cricket.”

Warner has a short turnaround in Australia, with the squad expected to
depart at the weekend for South Africa to play three warm-up games ahead of the World Twenty20 in India.