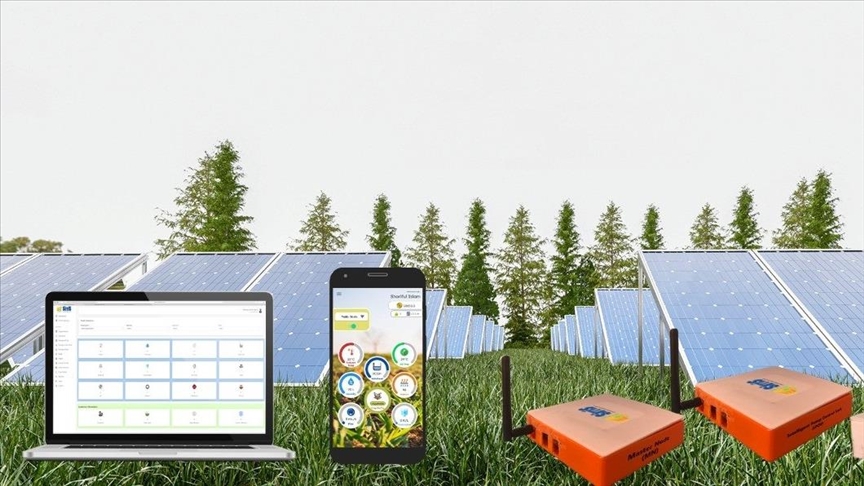 Solar-based irrigation could bring a revolutionary change in the optimum use of water for crop cultivation in Bangladesh by becoming an alternative to the costly fossil fuel-based conventional method, the developer of a new app told Anadolu Agency.
Bangladeshi scientist, Shahriar Ahmed Chowdhury, developed a method for a cheap solar irrigation system that reduces the dependency on electricity, ensures optimum use of water and cuts the use of fossil fuel.
Coinciding with World Sustainable Energy Day on Feb. 27, Chowdhury, who heads the Centre for Energy Research at United International University, shared details with Anadolu Agency.
According to the World Bank, about 87% of rural households rely on agriculture for at least part of their income.
And, farmers have to bear almost one-fourth of the yielding cost of irrigation as the pump owner takes 25% of the crop from agricultural fields for the service of irrigation pumps whereas the system could address the issue, according to the product information provided by Chowdhury.
The Smart Solar Irrigation System (SirriS) automatically controls irrigation based on the soil characteristics and crop type. The system can be monitored and controlled through a mobile or web app. By using the app, a farmer can remotely control the irrigation system, said the product information.
The innovation received government and World Bank funds and recognition. The project also won innovation awards from the Ministry of Power, Energy and Mineral Resources of Bangladesh.
Hassle-free smart irrigation saves power, resources
SirriS also can analyze crop profiles and allow the use of water on its basis as different types of crops require different irrigation like rice needs more water, on the other hand, vegetables need less water but it needs to control moisture for vegetable growing, according to the product information.
“The irrigation runs through a central control server. We have developed the system so that 1,000 pumps can be operated from the central system, which can also scale up to cover the whole country,” said Chowdhury.
“The system we developed will reduce wastage of water resources during irrigation, as the water requirement is determined by sensors. If it is adopted nationwide, it can help determine the estimation of water budgeting prior to irrigation season,” he said. “We usually require someone to standby during conventional irrigation. In many cases, children of farmers could not attend schools during the season because of assisting families during irrigation in villages. Our system will cut the hassle as SirriS does not require constant monitoring.” Solar power irrigation can reduce fossil fuel use, irrigation cost and carbon emissions because 75% of irrigation pumps out of 1.7 million in Bangladesh are run by diesel engines, according to the product information.
“The method could save about 1,500 liters of water to produce a kilogram of rice. It will also cut pressure on electricity and wash away fertilizer due to possible overwatering during manual irrigation,” said Chowdhury.
“This will reduce the waste of groundwater thus reducing adverse environmental impact as the majority of the irrigation pumps use groundwater. “It could save nearly 6 billion liters of diesel and 1500-megawatts of electricity per year if implemented nationwide,” he added.

“We successfully introduced SirriS on a pilot basis at the Keraniganj area on the outskirts of the capital, Dhaka. We are planning to conduct eight to 10 pilot programs that help the innovation expand further. Therefore, we need more investment,” the scientist underlined.

“We have already obtained a patent for the innovation. We are now looking for major local or global investment proposals for mass-level implementation and dissemination of the project,” he said.

“Massive investment in such innovation is to some extent difficult in countries like Bangladesh. However, we get some local and global funds and are currently conducting necessary research work on a government fund,’ he explained.

“We could experience a revolution in the country’s irrigation if the innovation is seen as mass implementation,” he said.

The automated irrigation and remote monitoring system need BDT 50,000 ($600) per system for a single valve system.

Farmers can also pay the bill by using mobile or web apps and can share resources like a business model, including sharing the irrigation cost.