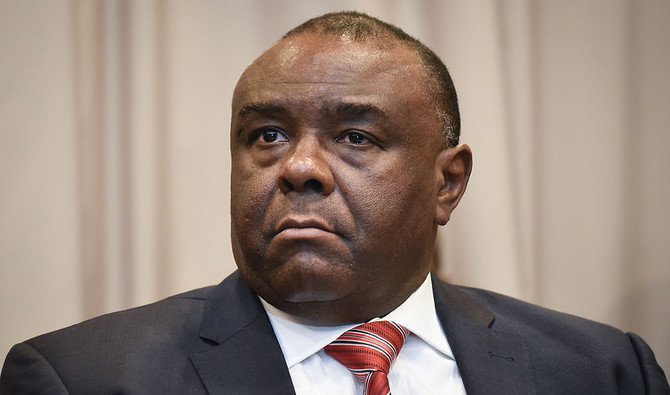 AFP: The International Criminal Court on Monday confirmed a one-year sentence against Congolese ex-vice president Jean-Pierre Bemba for bribing witnesses during an earlier trial, which saw him being excluded from running for president.
The decision came despite the fact that judges at the court in The Hague had previously ruled the original sentences were too low, and that prosecutors had asked for a maximum of five years.
“The chamber sentences Mr.Bemba to a total of 12 months of imprisonment. After deduction of time he previously spent in detention the chamber considers his time of imprisonment as served,” judge Bertram Schmitt said, and re-imposed a 300,000-euro fine on Bemba.
The ICC acquitted 55-year-old businessman-turned-rebel leader Bemba on appeal for war crimes and crimes against humanity three months ago.
However, Bemba and five co-accused were also found guilty on appeal in March of bribery, corruption and of coaching 14 defense witnesses during the main trial.
Bemba at the time was handed a year-long prison term and a 300,000 euro ($350,000) fine.
ICC appeals judges, however, then ruled that the sentences of up to two-and-half years were too low and sent the case back for re-sentencing.
Prosecutors called for a maximum five years to be imposed on Bemba, his lawyer Aime Kilolo and his legal case manager Jean-Jacques Mangenda.
But on Monday, judge Schmitt said: “Maximum prison sentences are not necessary” in this case.
“The chamber considers that the penalties it imposes during re-sentencing are proportionate, relative to the seriousness of the offenses in this case,” the judge said.
Despite Bemba being acquitted on the main charges of war crimes and crimes against humanity — committed by his troops in the Central African Republic in 2002-2003 — the bribery charges stuck.
It has become a major obstacle to Bemba’s political ambitions in the Democratic Republic of Congo.
In response to the corruption conviction, the Congolese Constitutional Court ruled that Bemba was ineligible to run in presidential polls on December 23 in the vast central African country.