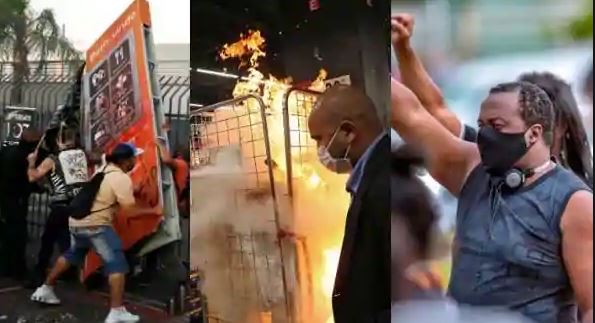 WION: [2] The killing, which has sparked protests across Brazil, occurred late on Thursday when a store employee called security after the man threatened to attack her, cable news channel GloboNews said, citing the Rio Grande do Sul state military police. [3] Amateur footage of the fatal beating and tributes to the Black victim were published on social media. He was identified in local media by his father as 40-year-old Joao Alberto Silveira Freitas.
[4] News website G1 later reported that an initial analysis by the state forensics institute indicated the cause of death could be asphyxiation. [5] In a statement on Friday, the local unit of France’s Carrefour SA said it deeply regretted what it called a brutal death and said it immediately took steps to ensure those responsible were legally punished.
[6] It said it would terminate the contract with the security firm, fire the employee in charge of the store at the time of the incident, and close the store as a mark of respect.

In Porto Alegre, protesters on Friday afternoon handed out stickers depicting the Carrefour logo stained with blood and called for a boycott of the chain. They held up a banner in Portuguese reading “Black Lives Matter” and signs calling for justice for Beto, a nickname for the victim.