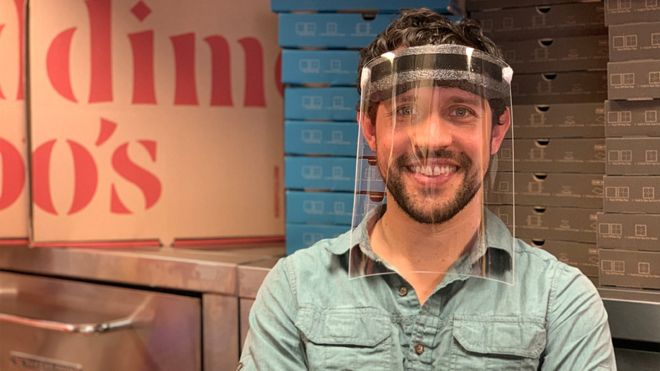 BBC: [2] In accordance with the state governor’s order that all bars and restaurants stop serving customers in-house, Dimo’s Pizza closed its dining room doors. “We can no longer serve by the slice,” says owner Dimitri Syrkin-Nikolau. “There goes 70% of our revenue.” Still, he agreed that the measures were necessary. [3] He’d been following news about the coronavirus outbreak for weeks and on the same weekend that Illinois shuttered its restaurants, New York City experienced the beginning of a terrifying surge in cases. From 15 March to 16 March, the numbers of cases more than doubled overnight. Nurses and doctors reported shortages of essential pieces of personal protective equipment (PPE) like N95 face masks, gowns and gloves. Some were having to wash and re-use masks. [4] Watching from 800 miles away, in a major metropolitan city that had not yet – but certainly would – feel the full force of the pandemic, Syrkin-Nikolau wanted to help prevent a similar shortage of supplies in Chicago. “It seems unlikely that a pizza shop is going to be able to produce PPE, but the more I talked to people…” he recalls. “It seems far-fetched but it’s not.” After consulting with a couple of his engineer friends and procuring large sheets of acrylic, Syrkin-Nikolau and his staff have started making face shields for healthcare workers. The industrial pizza oven heats the acrylic up until it’s soft enough to bend into the right shape, and then it is attached to a foam strip and straps.
[5] “It really is a very quick process,” he says. “Whether it’s slinging slices or slinging acrylic, it’s similar principles.” All over the city, Chicagoans are racing to take advantage of the lag time between the surge in New York City and the expected surge in Chicago, which at this point may have already begun. On Thursday, Governor JB Pritzker announced the largest single-day increase in Covid-19 deaths so far in the state: 82. As of 9 April, there have been 6,619 cases in the city of Chicago and 196 deaths. While none of the largest Chicago-area hospitals have reported a shortage of supplies, Illinois officials have described the marketplace for those supplies as “the wild west”. In one instance, a state employee had to race to a bank with a cheque for $3.4m (£2.7m) in order to purchase 1.5m N95 masks from a supplier in China before other bidders could snap them up.
[6] Smaller hospitals that serve low-income Chicagoans, like Loretto Hospital on the West Side, have said their stock of masks and gowns is low. Those concerns have inspired Chicagoans like Jacqueline Morano, a member of the Masks for Chicago campaign, to do everything possible to collect, make or buy PPE. “There’s the potential for things to get scary. We are a metropolis,” she says. “The texts I get from my friends in New York City hospitals are things you’d never want to read in your lifetime.”