Confucius, Beowulf and an AI called Kevin: Everything Everything’s search for hope in strange places 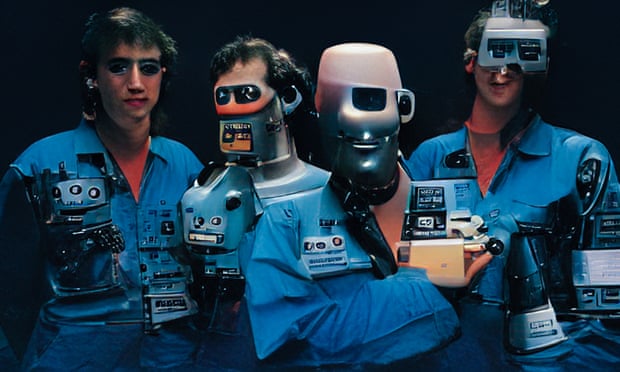 Acommon criticism of pop music today is that it is too dominated by technology. Vocals are smoothed into perfect pitch and drums or synths come from presets, the end result being that too many songs sound almost the same. They are lacking humanity, those critics say – literally brainless.
For Raw Data Feel, their superb new album, Everything Everything have gone further still, “abandoning the human brain”, says singer Jonathan Higgs, in favour of artificial intelligence. “Not until we were about halfway through,” he elaborates over a cuppa in a Manchester bar. “But, yeah, that’s exactly what we did.”
The singer was fascinated to read about how AI was being used to create poetry. “That’s one step away from what I do,” he thought. Curious, he used social media to ask people working in machine learning to get in touch. The most intriguing reply came from Mark Hanslip, a musician and researcher at the University of York’s Contemporary Music Research Centre. Higgs asked: “If I send you the data, can you feed it into your machine?”
Because Higgs’ lyrics tend to mix what he describes as “cold technology, modern toxicity, ancient myths and an element of prophecy”, he gave Hanslip an array of such raw data, drawn from extremes of human existence. “I wanted something really corporate, so I gave him LinkedIn’s terms and conditions,” he says. “Then I wanted something completely opposite, which was Beowulf, one of the oldest English poems.” The “dangerous, toxic, modern stuff” came courtesy of 400,000 comments from the internet forum 4chan, downloaded as a block. “Then I threw Confucius in as well, for a philosophical veneer.”
The process took an age, during which time Higgs sent Hanslip various prompts to give the gizmo. “And after all this it spat out reams and reams of nonsense,” Higgs chuckles. Songwriters (or any of us) can rest easy: human creativity isn’t about to be totally replaced by machines. In the end, Higgs estimates that AI provided only about 5% of the finished lyrics, but it did contribute a song title, (Software Greatman), plus imagery for artwork and videos, and did enough to get a songwriting credit. “Confusingly, we named it after one of the protagonists in the songs,” grins bassist/keyboardist Jeremy Pritchard. “So it’s called Kevin.”This engaging mix of intellectual curiosity and playfulness has made the Manchester-based foursome one of the UK’s premier art-rock bands, with five Top 40 albums (three of them Top 5) and a fanbase big enough to fill the 10,000-capacity Alexandra Palace. In person, they are not cold androids with their heads stuck in VR, though. Our hour-long conversation is peppered with laughter and self-mockery. Pritchard says that he and drummer Mike Spearman are “particularly luddite” and admits: “I haven’t turned my laptop on for a year, and it’s from 2012.”
Higgs reveals that tour bus activities tend to revolve around hanging out watching films of clothed chimpanzees rather than exploring new technology. He thinks the metaverse – a parallel space for online living, much trumpeted by Mark Zuckerberg – is “not particularly good” and as for cryptocurrency or NFTs, they are “mainly awful”. Granted, they do pepper conversation with phrases such as “cultural theory” or “maximalism”. Otherwise it’s hard to reconcile the two amiable chaps (Spearman and guitar/keyboardist Alex Robertshaw are elsewhere) with their regular depiction in the press as “geeks” or “nerd-rockers”.
“Would you call David Bowie a geek?” Higgs asks, reasonably. “Or Brian Eno?”
“Eno gets called a boffin,” sniggers Pritchard, prompting Higgs to further consider. “The bands that get given that label are Devo, Buggles and Kraftwerk,” he grins. “All of whom we love! And we do wear boiler suits and listen to Kraftwerk. So, er, yes.”Pritchard prefers to think of Everything Everything in terms of something Graham Coxon once said about Blur. “He said there’s ‘high street Blur’ Parklife and ‘backstreet Blur’, the druggy, scuzzy side, and the two sides are far apart. I see our band like that. On the face of it we’re a gurning party band in brightly coloured clothes, and then there’s this more considered underbelly.”When Everything Everything formed in 2006, shortly after Higgs and Pritchard met on a popular-music-and-recording course at Salford University, naming the band after a Radiohead lyric, they were briefly like any other group.