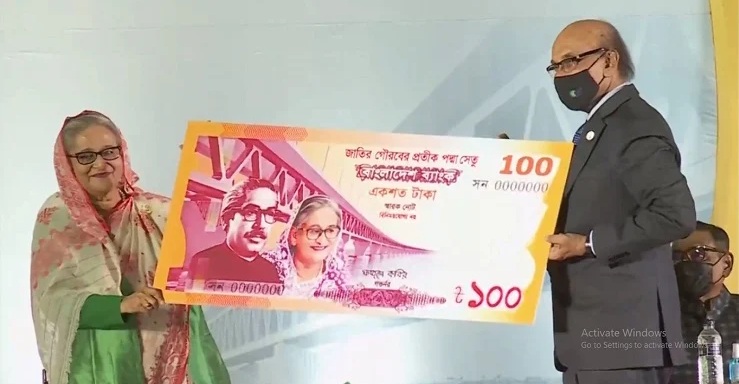 DOT Desk: Bangladesh Bank has launched a Tk100 commemorative note on the occasion of the inauguration of the Padma Bridge, reports Dhaka Tribune.
The bank’s governor, Fazle Kabir, handed over a giant symbolic note to Prime Minister Sheikh Hasina at a rally arranged to mark the inauguration on Saturday morning.
On the front side of the note, photographs of the Bangabandhu Sheikh Mujibur Rahman and Prime Minister Sheikh Hasina are imprinted, while a picture of Padma Bridge is printed in the background. The note also has the governor’s sign.
“Padma Bridge, a symbol of the nation’s glory” is written on the top right side of the note. A separate picture of the Padma Bridge is there on the back of the note as well.
The commemorative note will be available at the Motijheel office of the central bank from Sunday and later at other branch offices.