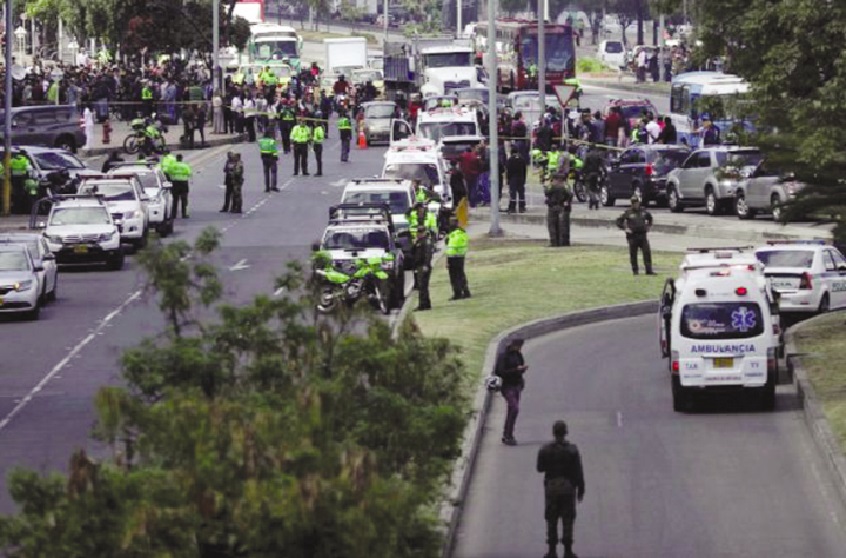 Reuters: Colombia’s ELN rebel group on Monday claimed responsibility for last week’s car bomb attack against a police academy that killed 21 as a legitimate act of war and urged President Ivan Duque to return to the negotiating table.
In a statement on its website, the National Liberation Army (ELN) said it conducted the attack against a “military installation” where officials are trained to provide intelligence and actively participate in the war.
“The operation carried out against said installations and troops is lawful within the law of war, there were no non-combatant victims,” the ELN said.
In last Thursday’s attack, a gray Nissan Patrol SUV carrying about 80 kilograms (176 lbs) of high explosive pentolite, broke through checkpoints onto the grounds of the General Santander School in the capital, Bogota, before it detonated, also damaging hundreds of apartments nearby.
The blast killed 20 cadets between the ages of 18 and 23 and the driver, ELN explosives expert Jose Aldemar Rojas, officials said.
The car bombing – the worst in Colombia in almost 16 years – brought tens of thousands to streets nationwide on Sunday in protest against violence and solidarity with the police. The attack heightened fears that a new wave of bombings had been launched in reaction to right-wing Duque.
The ELN, made up of some 2,000 fighters and considered a terrorist organization by the United States and European Union, began peace talks with the government of former President Juan Manuel Santos February 2017 but were postponed by Duque until the group stops attacks and frees all its hostages.
Duque on Friday asked Cuba, where talks were taking place, to capture and extradite 10 rebel leaders engaged in the talks.
The ELN, which was formed by radical Catholic priests in 1964, urged Duque to send a team of peace negotiators back to Havana to restart the talks that stalled when he took office in August.
“President Duque, we want to reiterate that war is not the future of Colombia, it is peace, so we remind you that the best thing for the country is to send your delegation to the table to give continuity to the peace process and the construction of the agreements started by the previous government,” the ELN said.
Cuba said it would respect the protocols of the negotiations it had been hosting and was consulting with both parties and the guarantors of the talks.
The protocols provide minimum security guarantees for guerrilla leaders to return to Colombia, providing security from military attack for an agreed period.
The ELN was the second biggest rebel group until peace was signed with the Revolutionary Armed Forces of Colombia (FARC) in late 2016.
The ELN, which has fought more than a dozen governments since it was formed, seeks land reform and opposes oil and mining activities by multinational companies, saying they take advantage of natural resources without benefiting Colombians.