Clothing from 1600s shipwreck shows how the 1 percent lived 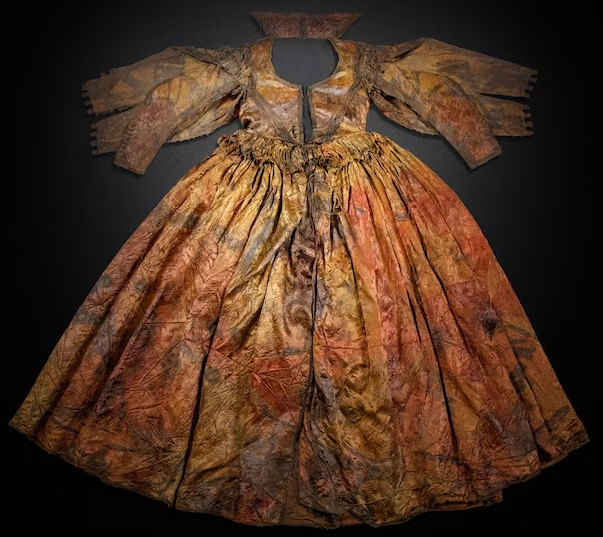 Years of research have raised more questions than answers regarding the spectacular contents of a 17th-century shipwreck in the Netherlands, which includes some of the most important clothing discoveries ever made in Europe.
The shipwreck was discovered in 2009 by a local diving club in Texel, an island in the Wadden Sea approximately 60 miles north of Amsterdam, and excavated between 2014 and 2017. Since then, some 1500 artifacts from the wreck— commonly called the “Palmwood Wreck” for its pricey hardwood cargo—have been undergoing study and conservation by an international team of researchers. This gown, fashioned from a light-colored silk that has discolored over the centuries, featured elaborate silver embroidery in a loveknot pattern.
What has awed archaeologists is the discovery of luxurious—and unusually well-preserved—clothing on the ship, including an elegant dress embroidered with silver loveknots, an elaborate damask gown, a lady’s toilet set and mirror, and a velvet, Ottoman-style tunic dyed with cochineal, a ruby-hued pigment obtained from insects only found in the Americas.
In addition, a collection of 32 leather-bound books dating to the 16th- and 17th centuries were discovered onboard. While the pages dissolved long ago, the embossed covers reveal volumes from several countries including France, Poland, and one bearing the crest of Britain’s Royal House of Stuart.
A 17th-century silk case found on the Palmwood Wreck was part of a woman’s high-end toiletry kit. “These would be hugely expensive objects in the 17th century, and someone took the effort to bring them all together and transport them from A to B. But why?” asks Alec Ewing, curator at the Museum Kaap Skil, a maritime museum in nearby Oudeschild. Based on the style of the clothing and information from the books, researchers first suspected the wreck may have been part of a convoy carrying Henrietta Maria, the wife of Charles I, from England to the Netherlands.
A letter describes how a baggage ship from the queen consort’s retinue, which contained the wardrobes of her two ladies-in-waiting and their maids, sunk in March 1642. A 1642 sinking was the working theory when the first clothing from the Palmwood Wreck was put on display at Museum Kaap Skil in 2016. Since then, however, researchers have teased more information from the ship’s remains—including that the Palmwood vessel likely didn’t even set sail before 1645.
Left: This ebony cross-staff found on the wreck would have been used as a navigation tool to determine the ship’s latitude.
Right: A detail from the cross-staff shows an inscription, likely from its owner, with the initials “H.I” and a date of 1636.
Based on dendrochronological data, the trees for the ship weren’t felled before around 1640, says Arent Vos, a Dutch maritime archaeologist who has worked extensively in the area, including on the Palmwood Wreck. Taking into account the time needed to build the ship and the average lifespan of a 17th-century vessel, he estimates the ship sailed between 1645 and 1660, plus or minus 10 years.
But if the Palmwood vessel wasn’t a floating royal wardrobe, what was it? The variety of clothing—some of which may have been decades-old at the time of sinking—as well as the international library of books (some dating to a century earlier), silver tableware, and other luxury items, leads some scholars to suggest that the artifacts may have belonged to an elite family, possibly travelling to a diplomatic posting. But other researchers wonder if that theory squares with all the artifacts researched so far. The Ottoman kaftan, for instance, would likely be out of place in an upper-class European woman’s wardrobe. “We try to answer these questions about who these people were, but [the kaftan] sort of makes it all not work anymore,” Ewing notes. Another theory is that the ship may have been carrying a theater company when it sank, says Corina Hordijk, Kapp Skil’s artistic director. “It’s just one of the theories. Interesting, but probably not the most plausible one.”
Then there’s the lack of undergarments. The ladies’ dresses would have required multiple layers of muslin, cotton, or wool beneath the silk creations, but researchers have yet to come across any evidence of underwear apart from silk socks and bodices. “It’s so weird,” Ewing notes. The clothing that has been conserved so far is currently on display in special oxygen-free display cases at the Museum Kapp Skil. But most of the 1,500-odd artifacts recovered from the wreck, including an elaborate silver set, still await study and conservation. While conservators have their hands full with the items that have been recovered from the seabed so far, most of the Palmwood Wreck remains unexcavated at the bottom of the Waddel Sea, swathed in a protective cover to shield it from destructive currents. “I have a fairly good idea which parts of the [ship] construction are still laying there in the bottom,” Vos says.
And while the researchers look forward to piecing together the story of the ship’s last voyage, Hordijk admits that there’s something special about the ongoing mystery of the woman behind the shipwrecked, silver-embroidered gown. “I like that all people can imagine for themselves whose dress it has been,” she muses. “Everyone can have their own fantasy.”