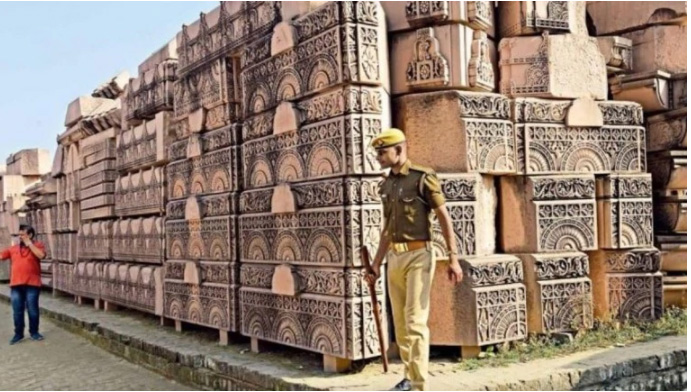 India Today: [2] Clearing of the Ram Janmabhoomi site in Ayodhya has begun with heavy earth-moving machines moving into the 67.7 acre premises, marking the beginning of the process of Ram temple construction.
[3] Chief priest of the makeshift temple, Acharya Satyendra Das, told IANS on Sunday morning, “It is a memorable moment for Hindus as we are now looking forward to temple construction at last. Machines have begun levelling land and clearing bushes and heavy thickets.”
Ram Lalla idols will be shifted 150 metres from the sanctum sanctorum of the makeshift temple to Manas Bhawan and placed in a bullet proof fibre structure till the temple is constructed.

The Ram Janmabhoomi site also houses more than 12 ancient temples, including Ram Janmasthan and Sita Rasoi, which are in ruins.

No rituals are performed here since 1993, when land was acquired by the Centre.

Dr Anil Mishra, a trustee, said, “The Trust will decide the fate of these shrines and on restarting worship in the temples.”

Sources said that a decision is to be taken whether these 12 temples would be a part of the grand Ram temple or relocated elsewhere.

Meanwhile, in a related development, Triloki Nath Pandey, 76, designated as the ‘next friend’ of Ram Lalla Virajman and decree holder of Ram Janmabhoomi as mandated by Supreme Court, has suffered a massive heart attack at his Karsewakpuram residence in Ayodhya.