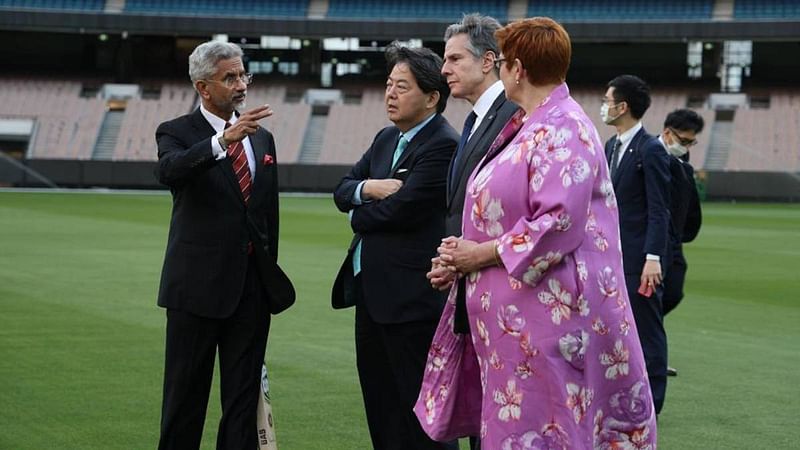 External Affairs Minister S. Jaishankar said Saturday that he raised the issue of India-China border standoff with Australia and the other Quad partners — US and Japan — as countries have “legitimate concerns” over Beijing not adhering to written agreements.
Jaishankar, who is currently visiting Australia for the Quad foreign ministers’ meeting held Friday, also said the Quad — or Quadrilateral Security Dialogue — has a “positive message and a positive approach.”
“Yes we had discussions on India-China relations (concerning the Line of Actual Control) because it was part of how we briefed each other about what was happening in our neighbourhood. It’s an issue in which a lot of countries legitimately take interest, particularly if they are from the Indo-Pacific region, because the situation has arisen due to the disregard by China in 2020 of written agreements with us not to amass forces at border,” he said during a joint press conference with his Australian counterpart Marise Payne, Saturday.
Jaishankar’s reaction came in the backdrop of a Chinese foreign ministry statement Friday, which said that the Quad is a “tool to contain” China.
The Minister said China’s constant criticism of the grouping does not make the Quad “less credible.”
‘Issue of legitimate concern’
Jaishankar added: “When a large country disregards border commitments I think it’s an issue of legitimate concern for the entire international community.”
According to Payne, the concerns around China have been reiterated in the Quad Foreign Ministers’ joint statement that said “international law, peace, and security in the maritime domain underpins the development and prosperity of the Indo-Pacific”, and called for “adherence to international law, particularly as reflected in the UN Convention on the Law of the Sea (UNCLOS), to meet challenges to the maritime rules-based order, including in the South and East China Seas.”
Immediately after the Quad foreign ministers meeting got over, Chinese Foreign Ministry spokesman Zhao Lijian gave a statement that the Quad grouping is a “deliberate move to stoke confrontation and undermine international solidarity and cooperation.” “Relevant countries should abandon the outdated Cold War mentality to correct their wrong practices of advancing bloc confrontation and geopolitical rivalry. Instead, they should play a constative role to promote peace and stability in the Asia Pacific region,” he said.
India faces significant challenges from China, says White House
The White House Friday released its Indo-Pacific Strategy, which highlighted that “India faces very significant challenges” due to “China’s behavior in the Line of Actual Control” as it “has had a galvanizing impact on India.”
In a media briefing, senior White House officials said, “From our standpoint, we see tremendous opportunities in working with another democracy, with a country that has a maritime tradition that understands the importance of the global commons to advance critical issues