China tries to reassure over economy at G20 meeting 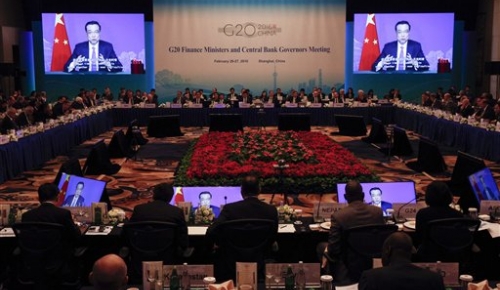 China’s premier has tried to quell anxiety about his slowing economy as officials at a global finance meeting called for governments to speed up job-creating reforms to stimulate slackening growth.

In a video message Friday at the meeting of finance ministers and central banks from the Group of 20 major economies, Premier Li Keqiang said Beijing has the tools and resources to combat downward pressure on growth.

With anxiety mounting over a global slowdown, companies and investors are looking to the meeting for reassurance and action. But the leaders have sought to squelch expectations it will produce specific growth plans. U.S. Treasury Secretary Jacob Lew warned earlier against expecting a “crisis response in a non-crisis environment.”

The Chinese hosts wanted the two-day meeting in Shanghai to promote their campaign for a bigger voice in managing global trade and finance. Instead, the communist government is scrambling to defend its reputation for competence following stock market and currency turmoil.

“The Chinese economy has great potential, resilience and flexibility, and we will capitalize on such strengths,” Li said.

Chinese economic growth slowed last year to a 25-year low of 7.3 percent and trade contracted. Growth is forecast to fall further this year.

Global growth is at its lowest in two years and forecasters say the danger of recession is rising. The IMF cut this year’s global growth forecast by 0.2 percentage points last month to 3.4 percent. It said another downgrade is likely in April.

Earlier Friday, Lagarde called for faster action on reforms promised at a G-20 meeting in 2014. That list included some 800 commitments meant to simplify regulations and boost trade, investment and technology development, but many have yet to be carried out.

“Policymakers do not need to invent yet another trick, but they need to deliver steadily on the commitments they have made,” Lagarde said at an event organized by the Washington-based Institute of International Finance alongside the Shanghai meeting.

Central banks still have room to use interest rate cuts and other stimulus but need governments to follow through with promised economic changes, said Mark Carney, head of the Bank of England.

“Global growth has disappointed because the innovation and ambition of global monetary policy has not been matched by structural measures,” Carney said at the IIF event.

Germany’s finance minister, Wolfgang Schauble, said fiscal stimulus has “reached its limit.” He urged other countries to deliver on reforms instead.

“It doesn’t lead anywhere good,” he told reporters. “I hope we can get a commitment to avoid that.”

A key concern in global financial markets, despite repeated Chinese denials, is that Beijing might weaken its yuan to support struggling exporters. That expectation has driven an outflow of capital from China that spiked to a record $135 billion in December.

“We will not resort to competitive depreciation to boost our advantage in exports,” said Zhou Xiaochuan at a news conference.