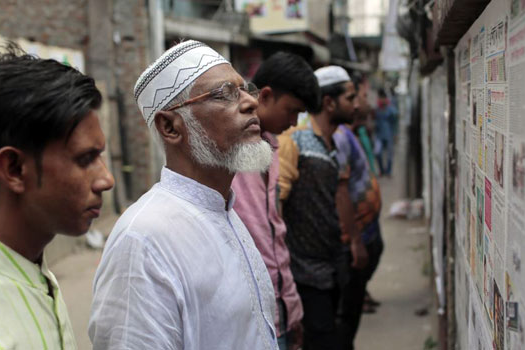 Social change is natural and it is primarily invisible in most cases like the falling hairline unless there is anything revolutionary. We see dramatic changes in our society when there is turbulent politics and social movements. Media people and researchers observe the changes, study those and come up with their findings after a time gap. The media landscape also embraces changes when there are changes in our society. But, the media’s change should be for the greater good of our society.

The expectations of people from journalists and teachers are very high as they treat them as change agents. Any deviation in their conducts hurts them most. The role of our teachers, journalists and students at every turn of our politics, particularly in the 50s and 60s, was remarkable. During the Liberation War, journalists had published newspapers risking their lives. The mass media’s role during various democratic movements in the country is appreciated by all quarters. So, media’s relations with people are very close. More importantly, the people of Bangladesh always demonstrate their keen interest in news. And perhaps this is one of the root causes of media boom in Bangladesh, a small country in the world map.

As the technology has made media ventures in Bangladesh much easier, the expansion of online media in the country has already set a record with 10,000 counted unofficially. The number is unusually high, and this craze will continue until a solid shape takes place with a farsighted online media policy. And there are social networking platforms which have already put the traditional journalism at an awkward position.

Although things are getting easier fast, the weakest point of Bangladesh media is still its economic insolvency and that is why many media outlets in Bangladesh are shut down prematurely, living many journalists unemployed. And this jobless media people in their efforts to survive also going for launching small online media outlets. Though most online media are born to die an impulsive death, some are doing well, belying the myth that a media venture cannot be made successful without huge investment. A handful of journalists have been able to make their mark in this emerging field.

A clear indication is there that the success of future media will largely depend on investment in human resources, not in infrastructure. New ideas and optimum utilisation of the information technology will pave the path for the future success. Money will not be there in the field as the only performer. There are allegations that corporate houses go for media ventures to protect their business interest. But, the journalists who are thriving on their hard work in the industry with their own media outlets are not doing enough for the community colleagues giving them the due space in their places. They are also becoming businessmen rather than creating a big but safe platform for the community members.

Another weak point of the newspaper industry is the political division among the journalist community. Unity of journalists under the umbrella of a single organisation not only helps protect the press from the onslaught of the authorities but also protect the professional and job interests of the journalists. Journalists here from Pakistan days till the early 90s had always been united under a single trade union. During the post 1975 days, journalists became highly politicised and they divided themselves along two sharp political lines.

Though slowly, the media are now showing more interest in business than fulfilling their social commitments unlike in the past. There was a time when media’s commitment to society was so strong that people would think twice before abandoning a newspaper. One day a few years back, this writer came across a man in his early 40s who subscribed a 4-5 Bangla newspapers from a kiosk at Kamalapur Railway Station. As I approached, he smiled and said, “I cannot rely on any particular newspaper for information, I need more than one to verify.”

Still, there are people who find it hard to switch over to any new newspaper, but there are so many options that one may change his or her mind anytime. The other day a huge debate at a gathering of journalists about the media’s houses overdrive in business. As usually happens, we got divided into two groups with one side saying there no harm in business overdrive by a media outlet as ‘news is also business,’ with another group insisting that without a social commitment no newspaper can make its way into the real readership.   The media’s main capital is people’s credibility and that capital should not be used only for business. The money a good media house earns with its own business it should be spent on its expansion, its human resource development and the welfare of its human resources.

Obsessed by its own success, a media house may lose its direction. Sometimes they spoil their all achievements with political over enthusiasm, making their ventures vulnerable.

I would like recall with a bit stupid manner the main objectives of journalism what we were taught in our university classroom — to inform, to educate, to entertain and to persuade. These days, the media are fulfilling the first two objectives fairly good. But their drive to fulfill the latter two objectives falls far short of the expectations.

For the last few weeks, the media industry has been seeing huge debates over The Daily Star Editor Mahfuz Anam’s admission of mistake in his editorial judgment in publishing DGFI-supplied unsubstantiated stories. It has been the talk of the town since the editor’s plain admission. While political leaders took swipe at him for his mistake, many media analysts appreciated him for his ‘confession’. To err is human. And those who edit newspapers are also human. But honest efforts should be there to allow the media to play their due role as change agents. They should not change their role as ‘change agents’.

A democratic society which we all build together is genuinely committed to letting citizens have equal influence on all crucial affairs. So it is important that all citizens have access to a wide range of well-formulated positions on the core issues of the day.