Cern scientist: ‘Physics built by men, not by invitation’ 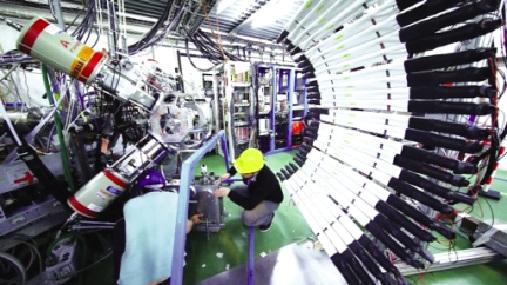 CNN
A senior scientist has given what has been described as a “highly offensive” presentation about the role of women in physics, the BBC has learned. At a workshop organised by Cern, Prof Alessandro Strumia of Pisa University said that “physics was invented and built by men, it’s not by invitation”. He said male scientists were being discriminated against because of ideology rather than merit.
He was speaking at a workshop in Geneva on gender and high energy physics.
Prof Strumia has since defended his comments, saying he was only presenting the facts.
Cern, the European nuclear research centre, described Prof Strumia’s presentation as “highly offensive”.
The centre, which discovered the Higgs Boson in 2012, has removed slides used in the talk from its website “in line with a code of conduct that does not tolerate personal attacks and insults”.
Prof Strumia, who regularly works at Cern, presented the results of a study of published research papers from an online library.
He told his audience of young, predominantly female physicists that his results “proved” that “physics is not sexist against women. However the truth does not matter, because it is part of a political battle coming from outside”.
He produced a series of graphs which, he claimed, showed that women were hired over men whose research was cited more by other scientists in their publications, which is an indication of higher quality.
He also presented data that he claimed showed that male and female researchers were equally cited at the start of their careers but men scored progressively better as their careers progressed. Prof Strumia pointed to behavioural research which he suggested may account for the disparity.
One study, he told his audience, indicated that “men prefer working with things and women prefer working with people” and another, he claimed, suggested that there was a “difference even in children before any social influence”. Prof Strumia said that these conclusions may “not be fully right… (but) the opposite assumption of identical brains is ideology”.
As evidence of discrimination against male researchers, Prof Strumia claimed that “Oxford University extends exam times for women’s benefit” and “Italy offers free or cheaper university for female (research) students”. He also said that he himself was overlooked for a job that he was more qualified for, which was given to a woman.
Dr Jessica Wade, a physicist at Imperial College London who was at the meeting, told BBC News that Prof Strumia’s analysis was simplistic, drawing on ideas that had “long been discredited”.
“It was really upsetting to those at the workshop,” she said.
“There were young women and men exchanging ideas and their experiences on how to encourage more women into the subject and to combat discrimination in their careers. Then this man gets up, saying all this horrible stuff.”
She added: “I don’t understand how such a forward thinking organisation like Cern, which does so much to promote diversity in research, could have invited him to speak to young people just starting off in their research careers when his ideas are so well known.”
In a statement, Cern – which currently has its first ever woman director-general – said that the organisers were not aware of the content of the talk prior to the workshop.
“Cern is a culturally diverse organisation bringing together people from dozens of nationalities. It is a place where everyone is welcome, and all have the same opportunities, regardless of ethnicity, beliefs, gender or sexual orientation,” it said.
A Cern spokesman confirmed that there was a video recording of the presentation. Senior managers would decide whether to release part or all of it, it said.
When the BBC contacted Prof Strumia he said: “People say that physics is sexist, physics is racist. I made some simple checks and discovered that it wasn’t, that it was becoming sexist against men and said so.”
Last month, Prof Jocelyn Bell Burnell told the BBC she believed that unconscious bias against women prevented them from getting jobs in physics research.
In 2015, Nobel laureate Prof Tim Hunt resigned from his position at University College London after telling an audience of young female scientists at a conference in South Korea that the “trouble with girls” in labs was that “when you criticise them they cry”.