Cenbank trims EDF by $1b to ease pressure on reserves 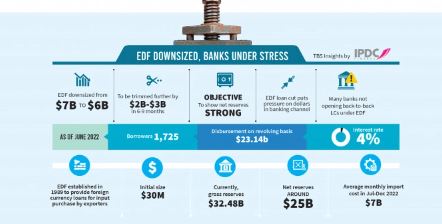 DOT Desk: The Bangladesh Bank has downsized the Export Development Fund (EDF) by $1 billion to $6 billion, and aims at reducing it by another $2-3 billion in the next six months, in line with the IMF’s suggestion to come out of commercial lending from the reserves, sources at the central bank said, reports TBS.
The move is a part of the central bank’s plan to phase out foreign currency lending under the EDF, which is built from forex reserves – a development that might upset exporters who have been availing low-cost finance in foreign currency under this fund for over three decades.
The IMF delegation that visited Dhaka in December last to discuss the terms and conditions for a prospective $4.5 billion loan also suggested that the central bank exclude the existing EDF loans from its reserve calculation, sources at the central banks told The Business Standard. In this perspective, the Bangladesh Bank has decided to phase out EDF lending in foreign currency as the fund cannot be shown in the forex reserves, said a senior executive of the central bank. The central bank has reduced the outstanding EDF loans over the past one month by speeding up loan recovery and slowing down new disbursement, he added. mEarlier, the IMF in its safeguards assessment of the Bangladesh Bank for 2021 raised objections about showing the EDF in the reserve calculation. Meanwhile, the central bank’s slashing EDF loan disbursal has exacerbated the prevailing dollar crisis in the banking channel, making banks refrain from opening letters of credit (LCs) under EDF and adding to businesses’ woes. m”We are facing huge troubles as banks are not opening LCs under the EDF,” Mohammad Hatem, executive president of the Bangladesh Knitwear Manufacturers and Exporters Association (BKMEA), told The Business Standard yesterday.
A bicycle exporter who has been availing low-cost foreign currency under EDF for over a decade said their cost of doing business will shoot up as now they will have to take out loans from banks at much higher rates compared to those they used to get under EDF. According to industry insiders, the interest rate of EDF loans was previously determined in accordance with the London Interbank Offer Rate (Libor). Until the beginning of the Covid-induced economic downturn, the interest rate of EDF loans was fixed by adding 1.5% to the 6-month average Libor.