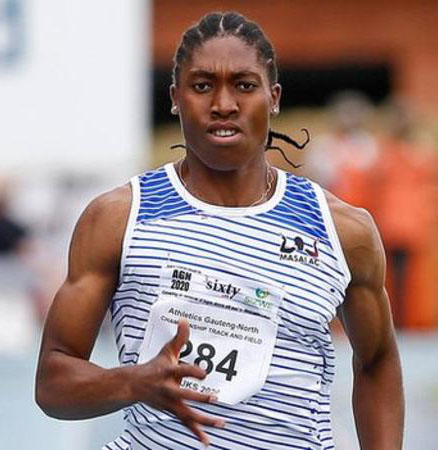 BBC: [2] Double Olympic 800m champion Caster Semenya has said she wants to compete at the 200m at the 2020 Tokyo Olympics.
[3] The South African, 29, is not allowed to compete in events between 400m and a mile without taking testosterone-reducing drugs, following a rule change by governing body World Athletics.
[4] “My dream has always been, and will continue to be, to compete at the highest level of sport and so in order to pursue my goals and dreams I have decided to change events and compete in the 200m,” said Semenya on Instagram.
[5] “This decision has not been an easy one but as always I look forward to the challenge and will work hard, doing all I can to qualify for Tokyo and compete to the best of my ability for South Africa.
[6] “Thank you to my team who have supported me over the past few months and thank you to all South Africans who believe in me and stand behind me.”
[7] If Semenya qualifies for the Olympics, she would be set to compete against Great Britain’s Dina Asher-Smith, who won 200m gold at the 2019 World Championships.
[8] Semenya, who won Olympic gold in the 800m in both 2012 and 2016, missed the chance to defend her world 800m title in Doha last year, having failed in her bid to prevent the governing body’s rule change.
[9] World Athletics argued female athletes with differences of sexual development (DSD) – such as Semenya – have “a competitive advantage”.

To be able to compete in the 200m in Tokyo, she would have to run a qualifying time of 22.80 seconds, although her current best is 24.26secs.

In February, Semenya competed in her first track meeting since last June with victory in the 300m in Johannesburg, winning her race in a national record of 36.78secs.