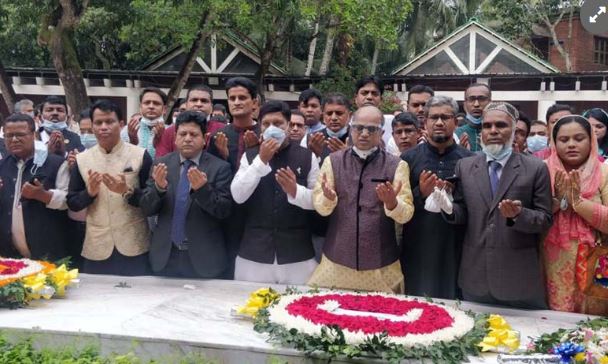 Imrul Hossain for DOT
[2] The newly appointed Attorney General of Bangladesh AM Aminuddin said that initiatives would be taken to reduce the case backlog at the courts of the country, reported The Daily Observer, Kaler Kantho. [3] “The courts remained shut due to the pandemic. That’s why; the number of new cases is relatively low. Initiatives will be taken to reduce the case backlog through increasing the working days,” said the Attorney General, while talking to the reporters yesterday. [4] Earlier the same day, the Attorney General paid homage to Father of the Nation Bangabandhu Sheikh Mujibur Rahman, placing wreaths at his grave.

in Tungipara upazila of Gopalganj.

[5] He also offered prayers at his grave seeking eternal peace of departed souls of Bangabandhu and the martyrs of the August 15, 1975 massacre.