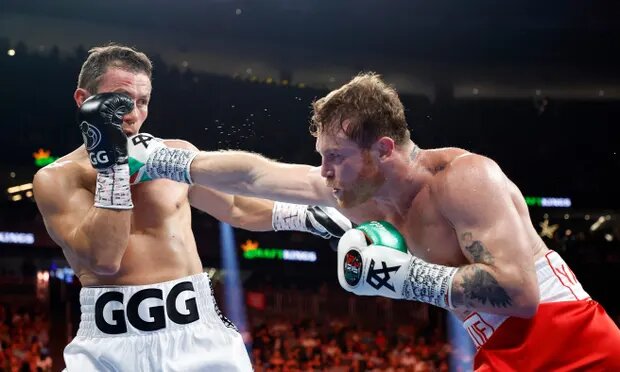 theguardian: Saúl ‘Canelo’ Álvarez swept aside the troubles of his difficult year, and a festering rivalry, when he defeated a faded Gennady Golovkin in a unanimous victory on points in their third fight in Las Vegas on Saturday night. Álvarez, the undisputed world super-middleweight champion, was a comprehensive winner and the only surprise was that, for once, the judges were sympathetic to Golovkin. Two scorecards of 115-113 were strange, with the third official’s verdict of 116-112 in favour of Álvarez a marginally more accurate reflection.Álvarez was too young, too strong and too driven for Golovkin – a once great world champion who is now a 40-year-old man in the unforgiving ring. Beneath the glaring lights and the percussive impact of Álvarez’s power punching, Golovkin cut a subdued figure from the outset of a one-sided contest. He was unable to impose himself and, especially in the first seven rounds, he looked a disconsolate version of the previously formidable middleweight champion who dominated his division for so many years. In contrast, Álvarez set about his work with fire and force. He was aggressive, if occasionally wild, and he pushed back Golovkin repeatedly. By the end of Round Five, the older man looked lonely on his stool in the corner, his face reddened and a swelling forming beneath his right eye.

Álvarez continued to land the meaningful punches and it looked as if Golovkin would need to rely on all his considerable bravery to survive a slow and methodical beating. But, to his credit, Golovkin dug deep within himself and there were fleeting bursts of effective work from him. Álvarez was dragged into a real fight in the ninth and tenth rounds when, finally,