Britain’s sea eagles are a magnificent sight, so why are people poisoning them? 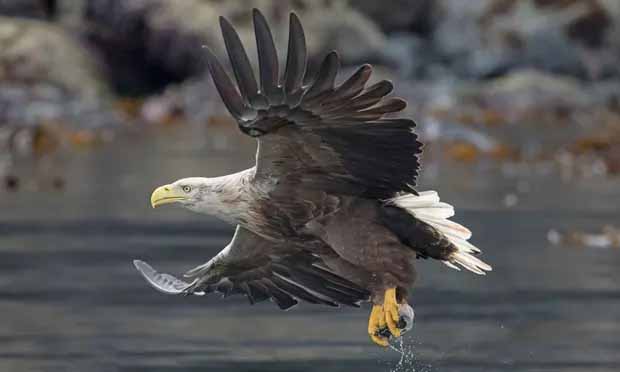 The sight of a magnificent white-tailed eagle has once again become common for those lucky enough to live in the flight path of those recently introduced to the Isle of Wight. Thousands of Britons have seen and heard the giant two-metre wings beating overhead, and seen the cruel-beaked birds dramatically dive for fish. For us, living in a nature-depleted country, seeing such a large predator in the wild takes the breath away.
White-tailed eagles were driven to extinction in Britain in the early 20th century, and persecution by landowners was the leading cause. Shot at and poisoned by those hoping to protect their game birds, Britain’s largest bird of prey didn’t stand a chance. Yet thanks to the work of conservationists, these raptors are now frequently spotted in the skies above the Isle of Wight and Scotland and sometimes even further afield. It’s the result of years of breeding programmes and negotiations with the Scottish and English governments.
But the tragedy that originally robbed us of perhaps our most awesome airborne predator looks as though it could repeat itself. Two of these giants have now been found dead on estates in Dorset and Sussex. While the cause of death has not been established, the multi-agency police investigation suggests that foul play could have been involved.
Currently, officers are conducting toxicology reports, suggesting they believe the eagles could have been poisoned. Sadly, this is all too common. In 2020 there were 137 confirmed incidents of raptor persecution, according to RSPB figures. However, these are only instances where a body is found quickly enough to determine the cause of death. Many more tagged birds of prey simply disappear, never to be seen again. A 2019 study found that of 58 hen harriers tagged over 10 years, 72% were either “confirmed to have been illegally killed or disappeared suddenly with no evidence of a tag malfunction.”

Gamekeepers have previously been found to be behind the poisoning of our raptors, as they prey on grouse and other birds stocked by estates for shooting parties. A bird of prey soaring above a shoot also makes the birds scatter, disappointing those who have paid to kill them. After a series of poisonings of rare white-tailed eagles on grouse estates in Scotland, the Scottish government took action, suspending general shooting licences in the hope it would reduce these crimes. But sources at the Home Office have told me it is very difficult to secure prosecutions for the crime of taking an endangered bird out of the sky.