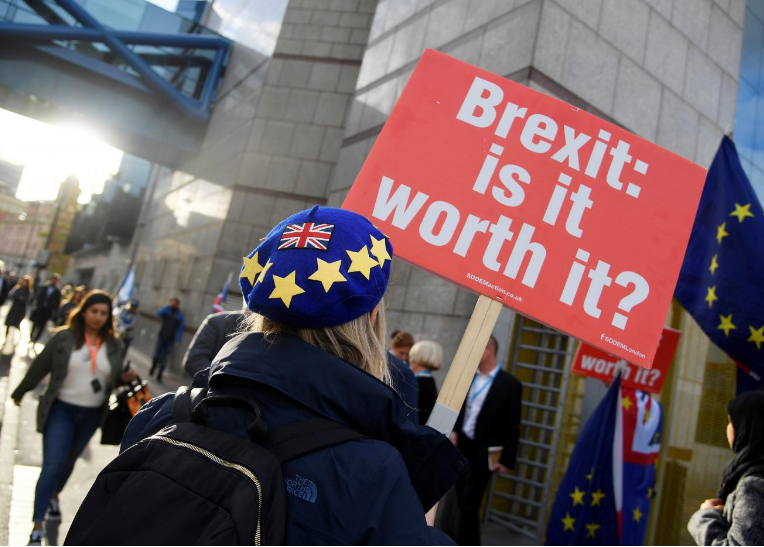 If Britain genuinely wanted a good last-minute Brexit deal, Foreign Secretary Jeremy Hunt should probably not have compared the European Union to the USSR.
His comments, at the autumn conference of Prime Minister Theresa May’s ruling Conservative Party on Monday, sparked predictable outrage from other European leaders. That was probably his intention: Hunt is one of several seen positioning to run for party leadership. Like his predecessor Boris Johnson and Donald Trump before him, Hunt looks to have calculated that outrageous language grabs attention and internal party support, even if it makes what the government needs to do increasingly impossible.
Almost everywhere one looks in Western politics this autumn, one finds ambitious politicians deliberately frustrating policymaking in the hope of personal or partisan gain. You see it in the rise of the far right in Germany, Austria and Sweden, the politicking around refugees in Italy and, of course, in the U.S. Congress. Weaponizing fear, outrage, and most of all division, they are likely betting crisis or confrontation will win them the support of narrow but powerful factions and electorates, either handing them new power or entrenching their authority.

The problem is that they are very rarely good at it. Staying ahead of the maelstrom of political news, geopolitics, and the machinations of their rivals means such plans seldom work out as expected. Nowhere is this more true than over Brexit – and it is sending the country stumbling perhaps irrevocably to a chaotic “no deal” outcome that will likely usher in further instability.
Only a few weeks ago, Britain’s exit looked like it would be a relatively moderate affair, shaped by a series of compromises brokered by the prime minister with the cabinet at her Chequers country residence in July. That deal, however, has now been rejected both by much of her own party and then irritated European leaders last month in Salzburg. This week, May and her party appear to be moving towards a much harder break, perhaps no deal at all.
That scenario, with all its implications for disruption of borders, markets and supplies is already doing Britain serious economic harm. One report estimated the country is now losing 500 million pounds a week in economic activity. So great is the uncertainty, however, that this damage is likely to escalate rapidly.
Within the next year, it is entirely plausible that Britain will have a Eurosceptic conservative government slashing taxes and spending in the hope of creating a right-wing Singapore-style haven. Or a snap election could usher in the opposition Labour Party on exactly the opposite platform, raising taxes on the rich and major firms to fund dramatic public sector investment. Calls are growing for a second referendum – but how that would work is very far from clear.
Some suggest a new vote should provide the choice between a chaotic “no deal” Brexit and something much more moderate, perhaps adopting a Norway- or Switzerland-like position outside the European Union, but closely linked to its nations and systems. Others argue that abandoning Brexit altogether and simply staying in must also be on the ballot. There have been few realistic suggestions as to how those three options could be offered without multiple rounds of voting. And at the time of such unpredictability, finding consensus seems to be becoming ever harder.It shouldn’t be a surprise that this is now damaging not just Britain’s national reputation, but real people’s lives. When one of my personal care assistants unexpectedly quit last month, I phoned one of my regular care agencies for a replacement. They had no one, they said – the young foreign workers who have provided the backbone of support since my injury 12 years ago were simply no longer coming.
I found an alternative privately, but this dynamic is now already rippling through business, agriculture, hospitality, healthcare and most other sections of the economy. On Tuesday, Home Secretary Sajid Javid outlined Britain’s latest thinking on post-Brexit immigration policy, setting new limits to prioritize skilled labor. What happens to the unskilled pool on which much of the economy depends has still not been announced – once again, short-term political aims appear to be driving wider policy.
How dangerous all this is depends on how you measure it. In some ways, what is happening in Britain – while deeply unpredictable – is less alarming than the trends in other European countries, where far-right parties continue to grow, supplanting a mainstream now struggling to defend even the basic tenets of multicultural and open societies. Britain has been protected from that by the resilience of its two-party- dominated system – but as in the United States, that means political battles within those systems can throw out wildly unpredictable consequences.
The hope must be that whatever the short-term problems, the Brexit saga sees a revitalization of politics on both sides, allowing the country to focus its attention on the issues that really count. Before we get there, however, it looks set to be one hell of a ride.