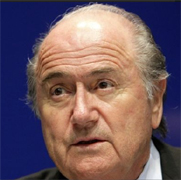 Sepp Blatter warned Gianni Infantino on Sunday that miracles will be expected from him as the newly elected FIFA president but there will be plenty of backstabbers if he fails to deliver.

But in an open letter to the Swiss-Italian lawyer, Blatter warned his successor to be wary of the pitfalls that come with the job. He also said he was ready to offer his help if required.

“I congratulate you, but remember however that this position you wanted will not be easy.

Miracles will be expected,” Blatter wrote in an open letter published in French newspaper,Journal du dimanche.

“I had these expectations for the last 18 years at FIFA which I served for 41 years.”

Blatter said that the package of reforms which will be implemented at the scandal-hit body will help Infantino as he embarks on his new era.

“The miracles will be helped by the vote overwhelmingly taken for the reforms which I had also started.

“If by chance, you want an opinion or advice, do not hesitate. For now, stay calm. You have two months to implement the decisions taken.”

Blatter said Infantino will be allowed a period of grace but could face stormy waters if reforms are implemented too slowly for the patience of federations and sponsors.

“Prepare yourself well but be vigilant. While everyone supports you and tells you nice words,know that once you are the president, friends become rare.”

The veteran official added that he was looking forward to other challenges in the future now that he is no longer the FIFA chief.

“At 18:01 on Friday, when you were elected, a weight lifted from my shoulders. I have now less responsibility and more time in my life. I am no longer president.”