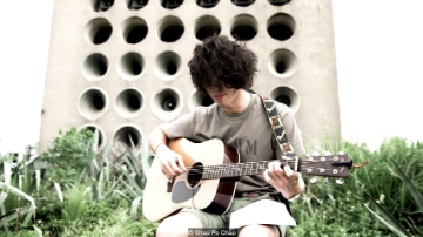 BBC
One sunny summer afternoon, a group of 30 people line up to enter a mysterious concrete tower on a small island off the coast of Taiwan. They are not curious tourists waiting to take a peek at the three-storey structure made up of 48 loudspeakers. In fact, they are there on an artistic mission – members of a local choir taking turns to sing into the microphone inside the tower, part of a one-off performance at a site that was once the embodiment of sonic power. It is the Beishan Broadcast Wall on one of Taiwan’s Kinmen Islands, just 2km (1.2 miles) away from China’s Xiamen city. Built in 1967, the broadcast wall used to be a strategic military stronghold that played a key role in sonic warfare across the straits, blasting out anti-communist propaganda. Nearly three decades after the tower stopped functioning, a group of artists based in Berlin and Taiwan are turning the forgotten historical site into an experimental art stage that investigates the idea of ‘territories’ beyond the conventional definition.
“The only way to deal with forgotten sites is to reinvent them in a creative way through art and music,” says Augustin Maurs, a Berlin-based interdisciplinary artist who created the sound art performance project Sonic Territories.
A classically trained cellist, Maurs has worked on projects that aim to reconceptualise traditional music and sound stages, including a concert with visual artists at Berlin’s Philharmonie in 2013. About a year ago, he came across pictures of the Beishan Broadcast Wall during his research, intrigued by the architecture and history of the loudspeaker tower. Sonic weapons are no modern-day invention. From the Bible’s description of the Battle of Jericho during which Israelite priests blew on rams’ horns some 3,500 years ago, to the conflicts between North and South Korea, sound has been deployed as a fatal weapon in addition to missiles and bullets, with the power to disturb and confuse enemies and cause injuries. The Kinmen Islands, which form the outlying Kinmen County of Taiwan, were the site of the bloody Battle of Guningtou during the Chinese Civil War in 1949. It was the battle that established today’s status quo between mainland China and Taiwan as the communists failed to defeat Kuomintang and seize Taiwan.
During the following decades until the 1990s, four broadcast stations were built in the Kinmen Islands to broadcast propaganda messages and music to mainland China. The sound of Beishan Broadcast Wall could reach as far as 25km (15.5 miles). Among the most famous messages were those from the late Taiwanese singer Teresa Teng, who was said to be the favourite of the former Chinese leader Deng Xiaoping. Some of her famous songs, such as Tian Mi Mi (Very Sweet), were played. She also went to the broadcast wall in person to speak to the mainland Chinese through the broadcast system in the tradition of starlets like Marlene Dietrich talking to troops, telling them that she was waiting for their visit to Kinmen and freedom was the only hope for the future of their country. These messages are still played today but at a much lower volume, as a tourist offering on the Kinmen Islands. Sonic Territories, comprised of four segments of sound and music performances by Maurs and three artists from Taiwan – Ada Yang Kai-ting, Chang Hsia-fei and Wang Fu-jui – is the first contemporary art project at the Beishan Broadcast Wall inspired by the history of the site and the medium of sound.