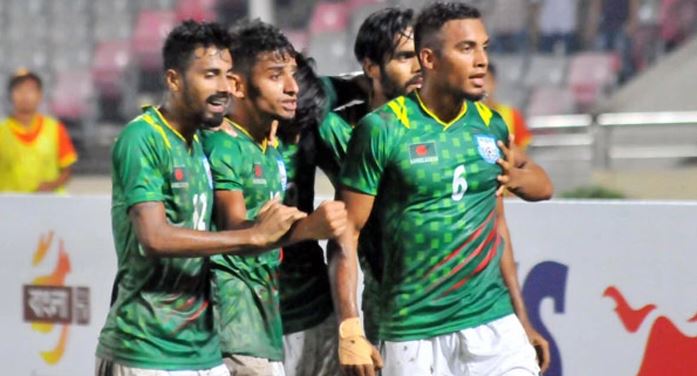 Rumi Akter Polly of DOT
[2] Yesterday after the latest FIFA rankings were published, Bangladesh moved from 187th position to 184th because of their 2-0 win over Nepal in the first match of the recently held ‘Mujib Barsho’ FIFA International friendly series in Dhaka, reports Jago News.
[3] Series wining has increased rating points of the red-green jersey holders, reports BSS.
[4] Earlier, their previous rating was 914. Now the rating of Bangladesh has increased by six points to 920. Bangladesh have won one and drawn one of the two FIFA friendly series against Nepal.
[5] On the other hand, Belgium is in the top position in the FIFA rankings. Lionel Messi’s team Argentina has moved to number eight to seven position.

However, the position of Brazil has not changed. The five-time world champions are still at number three position.

In the latest FIFA rankings, world champion France also remains unchanged. They are in the second place as like before. England stand at four position, Portugal at fifth position, Spain at sixth position, Uruguay at eight position, Mexico at ninth position and Italy at tenth position.

Japan is at the top of the list among the Asian countries. Their FIFA ranking is 27th position. Asian champions Qatar are 59th in the FIFA rankings.

Besides, Neighboring country India placed at 104th position jointly with Kenya in the FIFA rankings. Afghanistan stands at 150th position and Pakistan placed at 200th position while Sri Lanka stand at 206th position.