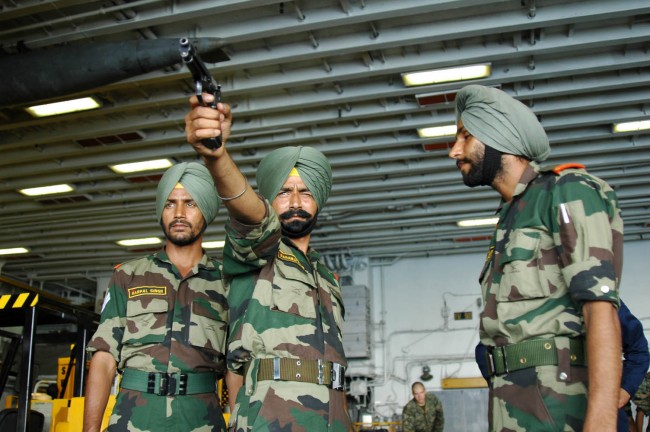 A certain giblet of news has been circulating around the world that the Indian Army has asked its candidates to strip down to their undergarments in order to avoid checking them before the exams and avoid cheating during it. The world has been outraged that candidates applying for the army have to undergo this sort of behavior which violates basic human rights in order to save on time and man power. Others are pretty complacent on the news saying that it isn’t a bad idea at all. A candidate wishing to remain anonymous stated that upon entry they were asked or rather ordered the candidates to strip down to their barest minimums and sit according to their allocated numbers in a field , resting their paper on the ground or on their lap and filling out the questionnaire. Photos of the scene have since been circulated by the Indian Express, worldwide and sparked controversy, with major news channels and papers doing stories on it. The procedure seemed to resemble how prisoners are stripped for searching before they are officially entered on the prison roster.
When asked about the allegations and supporting proof a spokesperson for the army stationed in Delhi, declined to answer. After a petition filed by a lawyer was presented, the High Court of Patna in Bihar asked the army the reason behind this drastic action, the army has issued an answer stating that the state has experienced widespread cheating during exams in recent times. Only last year, the news of parents scaling a school wall in order to help their children cheat went viral. But the question remains: Is this right? Is this how you treat a human being who’s applying to serve in your country’s army?
There have been no known incidents like this before in history for the like reasons. Yes, people have been stripped, searched, prodded and poked but not for sitting in an exam.