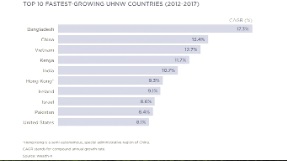 Abrar Hussain: Bangladesh has been ranked the “fastest growing country with an increasing number of rich populations in the world”, according to a report by the World Ultra Wealth Report 2018 by WEALTH-X. The report claims the ultra high net worth (UHNW) population in the country is now 17.3%, adding, “Vietnam, Bangladesh and the powerhouse of India, are expanding
at a faster pace and experiencing rapid urbanization, infrastructure investment and manufacturing growth.”The global ultra wealthy population comprises of people each with a net worth above $30 million.

Wealth creation in 2017 was most prevalent in Asia, with its ultra wealthy population expanding by 18.5% and its collective net worth surging by almost 27%. Meanwhile, North America – the world’s largest wealth hub – recorded a solid rise in UHNW individuals and total net worth but growth was moderately weaker than the global average.

Wealth creation was relatively subdued in Africa and in the Middle East, although this was still a clear improvement for both regions compared with developments in 2016.

The UK was the only country in the top 10 to lose ground in the rankings, the report added.