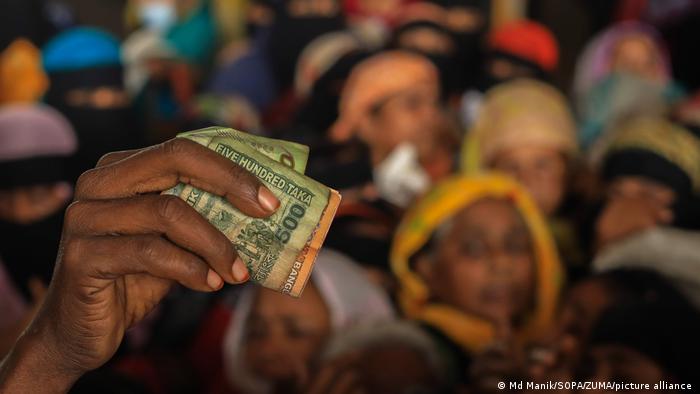 Jhumur Akther (not her real name) lost her job two years ago due to the coronavirus pandemic and hasn’t been able to find a new one since.
Akther, a resident of Dhaka, the capital of Bangladesh, has noticed a sharp increase in commodity prices and living costs in recent months, which has meant her family has had to eat less.
“We have decided to eat less to survive in this difficult time. From house rent to the edible oil price, every cost of living has been on the rise,” Akther told DW.
“Our only son hasn’t got a haircut since last year, and we haven’t bought anything new since the pandemic started two years ago,” she added.
Tawsia Tajmim, another resident of Dhaka, a megacity of over 10 million people that often tops the list of most polluted cities in the world, feels the pinch of surging commodity prices in every aspect of her life.
“I have stopped using Uber and pushed myself to use public transport to adjust to the price hike. The number of beggars is also increasing in the streets,” she told DW, adding, “our economy is becoming weaker day by day, and the poor as well as lower-middle-class people have been suffering the most as a result.”
Inflation rising to unsustainable levels
The International Monetary Fund (IMF) has forecast the headline Consumer Price Index (CPI) in Bangladesh to rise to 5.9% in the fiscal year 2022, due to higher international commodity prices.
Rising prices of food and other daily commodities have increasingly become a point of concern in the Muslim majority country in the wake of the coronavirus pandemic.
According to a survey published at the end of last year, the pandemic has pushed an estimated 32 million people into poverty. Critics blame the government for the spike in people living below the poverty line.
The Bangladesh Bureau of Statistics’ latest data shows that general inflation in the South Asian country in February climbed to 6.17%, the highest since October 2020.
The price of edible oil, sugar, and eggs have increased sharply, which contributed largely to the inflation.
“Bangladesh imports 95% of its edible oil from abroad. Before the Ukraine war, the price of edible oil per barrel was $700 (US) (€629); it went up to $1,940 after Russia invaded its neighbor,” Mohammad Ali Bhutta, a Bangladeshi importer of edible oil, told DW.
“We can’t sell oil at any subsidized price as businessmen,” he added.
Bangladesh also increased the price of liquified petroleum gas (LPG), used in the country for cooking, by 12% this month in response to the instability in the global market. Many households across the country use LPG as an alternative to the natural gas supplied by the government.The Bangladeshi government says that the price hike of consumer goods has been connected to the international market, and it won’t go down until the global market is stable again.”As the commodity price has increased in the international market, it has also affected our local market,” Tipu Munshi, Bangladesh’s commerce minister, told DW, adding, “we have been offering some consumer goods at a subsidized price to people in need to manage the situation.”The Trading Corporation of Bangladesh (TCB) offers commodity goods at subsidized prices to poor people in the South Asian country. Last month, Dhaka announced to extend this offer to 10 million low-income families, around 50 million people, out of the country’s 35 million families.

“We are selling edible oil, sugar, lentils, and onions at a subsidized price across the country,” Humayun Kabir, a director at TCB, told DW. “1.2 million families in Dhaka and 8.8 million elsewhere will get this support till April this year.”

Experts see government failure behind price hikes
While experts think offering consumer goods to low-income families at a subsidized price will help in a short time, they blame the government for not being able to control the market.

Nazneen Ahmed, the country economist of the United Nations Development Programme (UNDP), pointed out that the prices of edible products that Bangladesh produces have also gone up in recent months.

“Our rice production was excellent this year. Still, its price has got higher without any reasonable cause,” she told DW. “The government has to play a role here to control the market.”

DW Akademie | Young Feminism | Collage
FIGHTING DISCRIMINATION, SUPPORTING EQUALITY: YOUNG FEMINISM IN BANGLADESH
What does feminism mean to you?
Which topics really matter to Generation X und young Millenials? Seven women and a man, participants of a project by DW Akademie and Goethe-Institut Bangladesh, explain what feminism means to them.

123456789
Economist Mustafizur Rahman echoes that opinion. He thinks the government should draft a long-term plan to keep the market safe from price hikes.

“A monitoring mechanism is needed to stop unscrupulous businessmen, who tend to increase prices on different occasions. Government agencies should act together in this regard,” Rahman told DW.

Meanwhile, thousands of people took to the streets across Bangladesh this week to protest against the price hike following calls from left-wing political parties. They demanded the “business syndicate” be broken up and called for the market manipulation of essential commodities as well as ration cards for people in need.